It has been nearly a century since the first film based on Charles Dickens' Oliver Twist, and the Internet Movie Database indicates there have been over two dozen adaptations since then. But once we bracket off the TV shows, the silent movies, the children's cartoons and the modernizations (such as Jacob Tierney's Twist, which concerns male prostitutes in present-day Toronto), it turns out the story has been adapted for the big screen in a more-or-less straightforward manner only four times since the advent of talking pictures.

The first was a low-budget 1933 film that no one remembers. The second was David Lean's dark, moody, Gothic 1948 masterpiece, which is unfortunately remembered today mostly for its controversial and allegedly anti-Semitic depiction of Fagin, who is played by Alec Guinness. The third was Carol Reed's 1968 adaptation of Lionel Bart's musical Oliver!—not the most direct adaptation of the novel, to be sure, but still a faithful rendition of the story and its setting; it also had a footnote in film history as the last musical to win the Oscar for Best Picture, until Chicago came along. And now there is Roman Polanski's film.

This new film reunites Polanski with screenwriter Ronald Harwood and cinematographer Pawel Edelman, both of whom worked on his Holocaust drama The Pianist. And just as that film was hailed by some as a deeply personal project for its director but criticized by others for failing to provide a particularly personal a vision of the Holocaust, so too this new version of Oliver Twist feels like a strangely personal yet detached project for its director.

As a Holocaust survivor who was only 11 years old when the war ended, and whose parents were sent to concentration camps—his mother ... 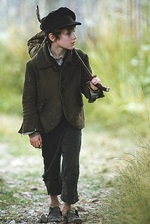