You won't see the famous pastel suits. You won't hear Jan Hammer's famous theme song. But as Miami Vice opens on the big screen, 22 years after its successful television run, you will get the unmistakably intense vibe that characterized the show. And you'll also see Colin Farrell wearing one of the most alarming movie mustaches since Will Ferrell played anchorman Ron Burgundy.

Farrell takes over for Don Johnson, playing the role of undercover cop Sonny Crockett, who works with his partner Ricardo Tubbs to "cut into" a South American drug-smuggling operation. Together, Crockett and Tubbs—played by Oscar-winner Jamie Foxx—risk their lives to discover how some white supremacists blew the cover on a crucial FBI operation. But as they venture deeper and deeper into a jungle of evil, posing as professional smugglers, they run the risk of losing their moral compasses along the way.

Their journey will take them far beyond the problem of the Aryans. After a tense meeting with a nervous drug dealer named Jose Yero (John Ortiz), they're taken all the way to an encounter with the cartel's Colombian prince of darkness—Arcángel de Jesús Montoya (Spanish actor Luis Tosar). This is a truly frightening and powerful man, who can deliver a bone-chilling threat by saying, in smooth and silky tones, "I extend my best wishes to your families."

But Crockett and Tubbs don't have families. They can't afford it. They know that anything they do could ruin not only their own lives, but the lives of anyone connected with them. They can't even fall in love, or they risk exposing and spoiling a whole network of operatives.

So no wonder Tubbs looks worried when Crockett announces that he's in the mood for love. "There's undercover," ... 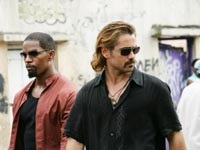