Think your boss is bad? Try having a silver-maned dragon lady waltz in every morning, plunk her fur and Fendi bag du jour down on your desk, and bark out orders such as "I'd like my breakfast now" or "bring me the table I saw at that store" or "my daughters need surf boards or boogie boards or whatever for our vacation tomorrow." Don't dream of asking for clarification or expecting to be called by the correct name.

That's the reality Andy Sachs (Anne Hathaway) faces every day as junior assistant to Miranda Preistly (Meryl Streep), editor of the fashion bible Runway Magazine. It's a job a million girls would die for, or so Andy is told at every turn. Though mostly Andy just wants to kill her fashionista boss for sending her on countless mindless errands, and then calling her every 20 seconds to amend, add to, or confuse the commands. But Andy, the baggie-clothed journalist who doesn't know Michael Kors from Michael Jackson, puts up with Miranda's sadistic behavior because she's been promised that if she can stick it out for a year, she can write her ticket to any job in the mag market.

Andy seems to have a forcefield of sunshine warding off the snarky stares and insults of senior assistant Emily (Emily Blunt) and the rest of the Clackers (so named for the sound their stilettos make on the hard floor). She fumbles her way through the strange new world of fashion intent on being unaffected by the materialism and meal-avoidance. But over time, Andy allows fashion editor Nigel (delightfully played by Stanley Tucci) to give her an extreme makeover. Though these changes are lovely on Hathaways' long, lean frame, some of the other changes that sneak in during Andy's tour of duty aren't so pretty—like the fact that she starts ... 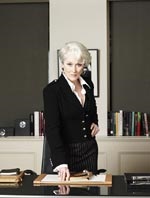