We went to Italy to visit the set of The Nativity Story, a New Line Cinema film coming to theaters this Christmas. Here's a behind-the-scenes peek at the making of the movie.
By Mark Moring|June 7, 2006

Away in a manger in an ancient village in southern Italy, the cattle aren't lowing, but the snakes, unfortunately, are hissing.

I'm in the heart of Bethlehem—OK, it's actually a movie set near Matera, Italy—and I'm standing in front of an empty stable that will serve as the real-live manger scene for The Nativity Story, an upcoming film about Joseph and Mary and the birth of Christ. Currently being shot in Matera—and later in Morocco—the New Line Cinema production will release worldwide on December 1.

The typical nativity creatures are kept nearby for filming the defining moment—cattle, an ox, some sheep, a donkey … pretty much what you'd expect.

But as we're gazing into the now-empty stable, an uninvited guest makes a cameo appearance: A five-foot long black snake slithers past the straw-filled trough which, just a few hours later, will hold a three-week-old boy, a local Italian infant as the baby Jesus. Crew members and set designers scurry away; some say the serpent is harmless, others, standing further back, aren't so sure.

"Whatever you do," yells one, "don't tell Keisha! She's terrified of snakes."

Keisha Castle-Hughes, a former Oscar nominee, is the 16-year-old New Zealander playing the role of Mary. But at the moment, she's a few miles away on a donkey, filming a scene on the road to Bethlehem with Miami's Oscar Isaac, who plays Joseph.

We all agree: Mum's the word. Keisha will never hear a peep.

Director Catherine Hardwicke (Thirteen, Lords of Dogtown) wouldn't want to know about the snake, either. She's already had a few uncooperative animals on the set—sheep running astray in the hills, magi-carrying camels refusing to walk down the street (while 200 extras waited for the cameras ... 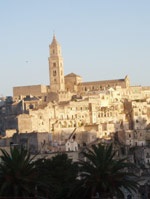