For many, the new film Amazing Grace will be their introduction to William Wilberforce, a devout Christian who, as a British parliamentarian, fought most of his life to ban the British slave trade. He finally succeeded in 1807—exactly 200 years ago to the day when the movie releases this Friday.

Despite that claim to fame, many are clueless about Wilberforce. But not British director Michael Apted, who was a history major at Cambridge and well aware of the abolitionist's place in history.

Apted, 66, is perhaps best known for films like The World Is Not Enough, Gorillas in the Mist, and Coal Miner's Daughter. But his best critical acclaim has been reserved for his Up films—a series of documentaries following the lives of several Brits every seven years. The first film was called 7 Up, the second 14 Up, and so on, till last year's 49 Up, which caught up with its subjects at the age of 49.

Between the Up films and the bio-pics about Dian Fossey and Loretta Lynn, Apted obviously has some experience depicting the lives of real people. But filming Wilberforce's story seems to have had a special impact on Apted, who says he was moved by the politician's passion for social justice, calling him a "man of principle."

We recently chatted with Apted about the new movie, and about his impressions of Wilberforce.

How did you get involved with this project, and why did you want to do it?

Michael Apted: The project had been around for some time, and they were having problems getting it going—I think the problem largely was scripts that I read. Generally, for a diverse audience, I think the early scripts were too much the story of a man's finding, losing, and finding Christianity again. I think they were having a hard time setting ... 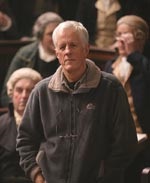