Last January, we had Glory Road. And now, with Martin Luther King Jr. Day coming up next week, it must be time for another true story about an educator who bucks the system and inspires his or her students to overcome racial barriers. At first glance, Freedom Writers looks like it might be just another one of those films in which a white idealist liberates her non-white pupils, but thankfully, it turns out to be something rather better than that.

The film, written and directed by Richard LaGravenese (best known perhaps as the writer of The Fisher King and The Bridges of Madison County), is based on The Freedom Writers Diary, a collection of essays about life in the inner city written by the students of Wilson High in Long Beach, California—and while the book may have been conceived and compiled by English teacher Erin Gruwell (played by Hilary Swank), the stories it tells are ultimately those of the students themselves.

Hilary Swank as Erin Gruwell, a young teacher in a difficult classroom

LaGravenese honors the movie's origins by opening not on Erin, but on one of her students-to-be, a Latina teenager named Eva (April Lee Hernandez) who has witnessed a drive-by shooting and the arrest of her father, and has taken a beating as part of her own initiation into gang life—all before her freshman year in high school.

Although these events are depicted in chronological order, they feel like a flashback, partly because we hear Eva narrate these events in what we gather is a passage from the diary that she will eventually write for Erin's class. And so this sequence unfolds as tragedy, but it also has an element of hope, because we are witnessing these events through the eyes of a young woman who is finding her voice; by reflecting on her circumstances, she will, hopefully, be able to rise above them.

Students are figuratively and literally divided in their distrust

The film then turns to Erin Gruwell herself, who shows up for her first day of school full of enthusiasm and not a little naïve. The students assigned to her class are troublemakers and deadbeats, at least in the eyes of the authorities, and Erin hasn't even finished the first roll call of the year before a fight breaks out. As the school year progresses, Erin's efforts to connect with her students—for example, by using a Tupac Shakur recording to explain "internal rhymes"—simply backfire, when they reject her as a poseur who doesn't understand what their life is really like.

Then, one day, one of Erin's students draws a racist caricature of one of her other students and passes it around the class. Seeing the picture, Erin turns indignant and lectures her class on the perils of prejudice—only to find that almost none of them have ever heard of the Holocaust. This gives her an idea: What if she could get her students to read Anne Frank's The Diary of a Young Girl, and to write their own diaries as well, bearing witness to the horrors around them just as Anne did?

Erin has a word with Andre (played by Mario)

It is tempting to compare scenes like this to that moment in To Sir, With Love where Sidney Poitier dumps a bunch of textbooks on the floor and declares that they are useless to his students, who must learn how to survive in the adult world instead. Erin does embark on a series of lessons and extracurricular activities which have an empowering effect on her students, but she never forgets she is an English teacher; when her students propose writing letters to Miep Gies, the woman who sheltered Anne Frank, Erin reminds them that their letters will be marked for proper grammar and punctuation first, so they should be prepared to write more than one draft.

The screenplay by LaGravenese does not completely sidestep cliché; Erin's father (Scott Glenn) is little more than the typical doubting parent who comes around in the end, and the film gives us two-dimensional, easy-to-despise villains in the form of a rival English teacher (John Benjamin Hickey) and a bitterly resentful department head played by Vera Drake's Imelda Staunton (who will soon play yet another evil, bureaucratic educator, in Harry Potter and the Order of the Phoenix). 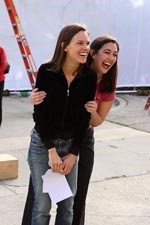 Swank with the real-life Gruwell on the set

But most of the other characters are portrayed with warmth and humanity. There obviously isn't time to get into the life story of every one of Erin's students, but several—such as the aforementioned Eva, or Marcus (Mercy Street's Jason Finn), a black student who insists to Erin that he and his classmates are living in a "war"—have their moments in the spotlight, some of which are quite moving.

Patrick Dempsey is also effective as Erin's husband; he's funny and supportive when she begins her job and can't find support anywhere else, but feels increasingly alienated as she spends less and less time at home, finding fulfillment in her students and, it seems, not in their relationship. It would have been easy for the film to "take sides" in the breakdown of their marriage, but to its credit, it does not.

And then there is Swank, who plays Erin with just the right mix of intelligence and conviction and, occasionally, cluelessness; at first, you're embarrassed for her, when she laughs at her own jokes or tries to fit in by using expressions like "What's the dealio?" Even her pivotal rant about the Holocaust feels a bit like an overreaction, at first, to what is, arguably, just a note passed in class. But by the end, she has earned the right to be a little out of step. By never apologizing for who she is, she gets to become just another one of the misfits; and by being willing to learn from her students, she empowers them to make their own changes for the better, too.

Freedom Writers is rated PG-13 for violent content (including gang-related beatings and shootings, though relatively little blood is shown onscreen), some thematic material and language (about half-a-dozen four-letter words).

Writer and director Richard LaGravenese (who also wrote The Fisher King) is catching critics by surprise this week. Movies about inspiring teachers who motivate reluctant, troubled students are far too common on the big screen. But Freedom Writers, LaGravenese's latest work, has audiences cheering. It's something special.

Hilary Swank stars in this true story of Erin Gruwell, who stirred up a classroom of students from different ethnic backgrounds.

David DiCerto (Catholic News Service) calls it "an unexpectedly good classroom drama in the tradition of Dangerous Minds and Stand and Deliver. … LaGravenese overcomes a predictable and, at times, message-heavy script with emotionally powerful performances by the young ensemble and redemptive themes of self-worth, the efficacy of education and empathy to overcome intolerance, and the ability of one person to make a difference."

Marcus Yoars (Plugged In) says, "In terms of true stories, Erin Gruwell's is a remarkable adventure that encompasses sacrifice, determination, fearlessness and hope. It's more than worthy to be told onscreen. And the result is that exceptional messages get communicated in almost every scene as these kids grab hold of something beautiful and life-changing."

Christian Hamaker (Crosswalk) says, "Although it doesn't reach the peaks of Akeelah and the Bee in its acting, and goes a bit too far in its sermonizing, Freedom Writers, inspired by a true story, is a fine, uplifting tale of an idealistic young woman and the hope she instills in her students."

Mainstream critics are impressed with it as well, and many surprised to find it so much better than other films that follow the same theme.

Marcus Yoars (Plugged In) says, "Fifty profanities and moments of gore certainly detract from this story. … [But] Erin Gruwell's is a remarkable adventure that encompasses sacrifice, determination, fearlessness and hope. … [E]xceptional messages get communicated in almost every scene as these kids grab hold of something beautiful and life-changing."

Kathy Bledsoe (Past the Popcorn) says, "All the elements are present to make a movie that entertains and educates. The problem is that the subject has been explored before and better—Stand and Deliver, Mr. Holland's Opus, Dangerous Minds, etc."

1 of 4
Hilary Swank as Erin Gruwell, a young teacher in a difficult classroomStudents are figuratively and literally divided in their distrustErin has a word with Andre (played by Mario)Swank with the real-life Gruwell on the set