Ocean's Thirteen is—to use a highly technical term—cool. The suits are sleek, the dialogue snappy, the tone wry, the jazz hip. Even Las Vegas—bastion of neon kitsch that it is—looks opulently graceful. The Ocean movies (2001's Ocean's Eleven and 2004's Ocean's Twelve) have never been hard to look at, but director Steven Soderbergh's third run at the heist formula seems to be a case of practice making perfect. Every color-saturated frame of Ocean's Thirteen entertains as intended. The waters in this ocean aren't deep, but they sure do sparkle on the surface.

The film presumes familiarity with its gang of suave thieves and opens with the heart attack of beloved senior member Reuben (Elliot Gould). A worried Danny (George Clooney), Rusty (Brad Pitt), and the rest of the boys (the same stellar ensemble featured in the earlier films) hold vigil at Reuben's bedside, not only to root for his recovery but also to plot vengeance for his undoing. Reuben's failing health is attributed directly to the unsavory dealings of Willie Bank (a wonderfully over-the-top Al Pacino), a ruthless casino owner who betrayed him and cut him out of a hotel partnership, leaving him in emotional and financial ruin. 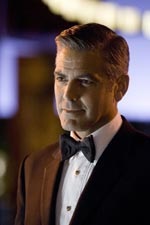 When Danny confronts Bank and gives him a chance to mend his ways, Bank refuses with such callousness and arrogance that the audience is more than ready to spend the next two hours cheering for his comeuppance. The gang decides to take Bank down by sabotaging his Vegas hotel in a number of clever and amusing ways. At the center of their plan is a scheme to rig the casino on opening night so that the house loses a targeted five hundred million dollars (the loss needed for Bank to lose control of the hotel). There is also an elaborate set of manipulations to ensure that Bank's new hotel does not get the five diamond rating he is obsessed with earning. And, once former nemesis Benedict (Andy Garcia) comes to the Ocean-side as the scheme's financial backer (Bank's new hotel casts a shadow on his swimming pool), the to-do list includes the theft of about two hundred and fifty million dollars' worth of diamonds.

Ocean's Thirteen follows the same basic formula as the first two films, unfolding a series of convoluted schemes, cons, hi-tech hi-jinks, double-identities and plot twists as the boys outsmart rivals and increasingly-sophisticated security systems. There are few genuine surprises; the audience, having been through this twice already, knows that not everyone is who they appear to be and that Danny and his comrades are up to any challenge. Still, it's fun to watch the gang solve a new set of problems, and if this film is inferior to the others in providing the unexpected, it is superior in clarity. (Most of the time, I actually understood what was going on.)

Ocean's Thirteen also has a moral edge (or at least the sensation of one) over its predecessors. The men are motivated not by greed but by a desire for justice (okay, vengeance, but Bank is such a baddie it feels just). They are less interested in personal spoils than in spoiling Bank's ill-gotten gains. The writers (Brian Koppelman and David Levien, who scripted the poker movie Rounders and bring more of an emphasis on gambling to this film) incorporate several plot points to ensure the audience gets the satisfaction of a moral victory. The villain is appropriately reprehensible. ("Reuben made the right decision," says Bank, when he learns of Reuben's heart attack, suggesting anyone so easily duped should just "roll over and die.") The men don't keep the cash from the rigged casino for themselves but set up hundreds of unsuspecting gamblers to win. When Virgil (Casey Affleck) and Turk (Scott Caan) are sent to work undercover at a Mexican dice plant (to create loaded die), they don't leave without inciting—and then helping to resolve—a labor uprising for fairer wages. (Virgil's moving "Remember Zapata" speech is a real highlight.) Even a funny subplot involving Oprah's Angel Network helps ensure that the film has a heart.

Leading women are conspicuously absent from Ocean's Thirteen; Danny's Tess (Julia Roberts) and Rusty's Isabel (Catherine Zeta-Jones) are presumably back at home. ("It's not their fight," says Danny, early in the film, and they are not mentioned by name again.) Ellen Barkin has the only featured female role, as Bank's ambitious and licentious right-hand woman, Abigail Sponder. The absence of love interests actually works to the film's benefit by streamlining the story and placing the emphasis squarely on the camaraderie of the men and their efficiency as a team. The Ocean movies have always been the least indulgent and the most successful when they have stuck to an ensemble formula. By minimizing outside relationships, Ocean's Thirteen is able to focus on the way the group works together to protect a friend they love. (When the franchise was established it would have been nice if a woman had been allowed to be part of the original team, but maybe that would have robbed the films of their brat pack nostalgia.)

Character development is as minimal as one would expect for a film featuring thirteen (and counting) lead characters. Still, the screenplay manages to do a lot with a little, mining the insecurity of Linus (Matt Damon), the poetic spirit of Basher (Don Cheadle), and the sibling rivalry of Virgil and Turk to great effect. The bond between Danny and Rusty is sketched more than drawn, but it works. The two men return often to the subject of romantic relationships, talking in the non sequitur rhythm of real-life dialogue.

Male bonding at its finest.

If there's a weakness with Ocean's Thirteen, it's that the hip-ness that makes it strong also keeps it very even and relaxed. It's amusing more than hilarious, intriguing more than suspenseful, stylish more than exciting. It doesn't so much climax as conclude. But it celebrates collaboration, ingenuity and loyalty in some immensely satisfying ways. And that's pretty cool.

Ocean's Thirteen contains several mild expletives and one suggestive (but fully clothed) seduction scene (played for laughs). Potential peril is implied but never happens; other than the roughing up of one casino patron, there is almost no violence.