In 2004, screenwriter Stephen Knight went prowling in the London underworld and found one of the year's best big-screen stories—Dirty Pretty Things. In that film, illegal immigrants accepted laborious, thankless, humiliating jobs just to scrape up enough cash to survive. For some, desperation led to dangerous deals, like selling their bodily organs to the black market. But the underworld's overlord was eventually challenged by a brave, compassionate man—a hotel employee with medical skills—who stood up to defend the defenseless.

This year, Knight goes deeper into London's shadows and finds another story about monstrous people who take advantage of the vulnerable. He also finds another conflicted soul who takes measures to help a woman in jeopardy. This time, that "hero" is a member of the Russian mafia.

It starts like this: When a midwife named Anna (Naomi Watts) saves the unborn child of a dying Russian woman, she decides to look for the infant girl's family. How can she locate them? Anna decides to sift the dead woman's diary for clues.

But there's a problem. The diary's in Russian, and Anna needs help translating it. Her parents (Sinead Cusack and Jerzy Skolimowski) are reluctant; they think that the dead woman's belongings should be left alone.

So Anna appeals to a Russian restaurateur, a softspoken fellow named Semyon (Armin Mueller-Stahl). Semyon is more than willing to translate the diary. In fact, he has a personal interest in it. He's the head of the local Russian mobsters, and he suspects that the diary may reveal some of his deepest, darkest secrets. When Anna realizes her mistake, it's too late—she, her parents, and the infant are caught in the claws of London's most dangerous crook.

These gangsters—an exceedingly dangerous lot called the "vory v zakone"—are involved in all kinds of crimes. Led by Semyon, who calls himself "the king," and annoyed by his son, a reckless drunkard named Kirrill (Vincent Cassel), their routines involve killing off their enemies, cutting off the corpses' fingers, and dumping the bodies. 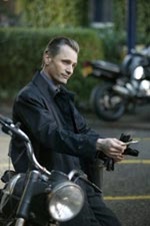 Furious, Anna confronts Nikolai (Viggo Mortensen), one of Semyon's thugs, demanding to know how he could work for such a monster. Nikolai insists that he's "just a driver."

Just a driver? We've seen Nikolai's heartless participation in Semyon's crimes. We also know that he's been imprisoned in Siberia. Wild tattoos are strewn across his whole body like graffiti, including an elaborate crucifix across his chest. He stands before his superiors, stripped bare, and boasts, "I am dead already. Now I live in the zone all the time." Nobody bothers to ask Nikolai what he means by "the zone," and that's probably for the best.

The suspense rises as Nikolai takes a personal interest in Anna. Soon, he's taking action to protect her and her family from his dangerous boss, who is so anxious to bury his secrets that he's willing to bury those who discover them as well.

Some of the best films of the last few years have taken us deep into dangerous territory, where we've witnessed bloody and terrible deeds. In The Departed, we watched an undercover agent struggle with moral compromises as he crept up close to the criminal kingpin and attempted to bring him down. In The Lives of Others, a Stasi surveillance agent went undercover, only to discover compassion for his targets as his conscience flared to life.

But in spite of the thematic similarities, Eastern Promises differs in significant ways from all of these films. Where the camera cut away in Dirty Pretty Things and left bloodshed to our imagination, Eastern Promises makes us watch gory details. While The Departed never let the violence distract us from the intricate storytelling, Eastern Promises goes to such extremes that we're likely to wonder how they staged such realistic throat-slittings and stabbings. The Lives of Others convinced us of the villains' malevolence through the fear of the people who cowered before them, but Eastern Promises does not flinch while brutal killings and sexual abuse takes place.

Experienced moviegoers will anticipate as much as they go into the theater, because they'll know that this film was directed by David Cronenberg. Cronenberg has a reputation for making audiences squirm, putting them through graphic portrayals of bloodshed, abusive sex, and bodily disfigurement. Early in his career, he made low budget horror movies; now he makes sophisticated horror movies that attract the best actors in the business. He is more interested in violence, its effect on the body, and its effect on the heart than any other filmmaker. But he seems torn between the study of violence and sheer revelry in staging it.

In A History of Violence, shockingly violent sequences served Cronenberg's storytelling powerfully. He guided us in considering how violence, even when it is employed to defend the American Dream, does a great deal of damage and makes a serious mess. It also does irreparable damage to the minds and hearts of those who carry it out.

But in Eastern Promises, Cronenberg takes the onscreen violence to excessive levels, and it does very little to further his exploration of the theme. This reviewer sees no particular value in being forced to watch victims sit and struggle while Russian mafia agents slit—no, saw—their throats open. We don't need to see one thug digging around in another's eye socket with a knife.

Later, Nikolai must prove his loyalty to Kirill—the "prince" of this Russian family—by having violent sex with a traumatized prostitute, and the depiction is absolutely obscene and grossly inappropriate. By this time, the audience already believes that Nikolai is participating in terrible crimes, and we do not need this kind of evidence. 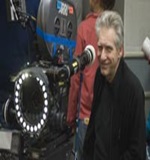 And when Nikolai—completely naked—defends himself against two assassins in a brutal bathhouse brawl, Cronenberg's enthusiasm for this shocking, audacious sequence gets the better of him. This "daring" scene is sure to win all kinds of critical accolades—indeed, the film won top prize at the Toronto International Film Festival, making it a sure Oscar candidate—but audacity is not a virtue in itself. The whole scene seems contrived for the sole purpose of being "something audiences have never seen before." Sure, the fight choreography is fantastic. But the scene is likely to shift the audience's attention away from the story; they'll just be thinking about Viggo Mortensen and his bravado in performing the scene unclothed.

It's a shame, because Eastern Promises boasts some of this year's best performances. Watts wins our sympathies right away. Mueller-Stahl's turn is masterful—he makes Semyon terrifying by delivering deadly threats in the tone of a wise and gentle grandfather expressing affection for his grandchildren. And Mortensen shows that he's advancing to the front ranks of big screen actors with a complex, nuanced performance. His face is a fantastic subject—he can convey menace, moral conflict, and longing with the slightest quiver in his brow or a tremor in his grim smile. Most impressive of all, his Russian accent is utterly convincing.

What is more, Knight's screenplay weaves a web of relationships as complex as those in Shakespeare's tragedies. The story raises questions about father-son relationships, introducing two dangerous fathers and two sons who are reckless and fractured in different ways. It also raises questions about sexuality, and what happens within societies of violent men who hate and abuse women. (The mobsters seem violently offended by any suggestion of homosexuality, but Kirill has an affection for Nikolai that is something more than brotherly love.) And we might also discuss the pros and cons of multiculturalism, as London's Russian subculture is portrayed here as a world insulated from the world outside.

But alas, Cronenberg and Mortensen are too invested in shocking and discomforting their audiences to give us much opportunity for contemplation. In a recent interview about the film, Cronenberg expressed that he's more concerned with making his audience feel something—anything—than he is with making them think or discover something meaningful. He said, "I just want them to feel. Period. I don't have any rules about how they should feel."

Well, Eastern Promises certainly forces audiences to feel. A viewer with a conscience is most likely going to feel shocked, sickened, repulsed, exhausted—and even abused. In his severity, Cronenberg disrupts the audience's immersion in a story that might have become a landmark tale of corruption and conscience on par with The Godfather, Chinatown, and Miller's Crossing.

Eastern Promises is rated R for strong brutal and bloody violence, some graphic sexuality, language and nudity. It is a film about heartless criminals, with plenty of graphic violence, sex, and language. The film goes far beyond the bounds of propriety. We see not one but two men get their throats slit open, and the camera lingers on them as their blood pours from the wounds. One of the gangsters is goaded into a violent, abusive sex act, and Cronenberg sees fit to film the act in graphic detail.

1 of 4
Naomi Watts as AnnaViggo Mortensen as NikolaiVincent Cassell as KirillDirector David Cronenberg basked in glory, er, gory, in this film