In the far-flung span of human history, only twelve men have ever stepped on the surface of another celestial body. And yet, somehow we have managed to convince ourselves that such acts of mind-boggling ingenuity and stunning heroism are now commonplace.

The new documentary, In the Shadow of the Moon, reminds us all that America's space program is nothing short of astonishing and that humankind's venture into the vast, freezing abyss of outer space is one of the most extraordinary and significant moments in the history of our species. It celebrates the know-how of thousands of engineers and the derring-do of dozens of astronauts who embraced the most audacious act of outlandish genius ever proposed.

In the Shadow of the Moon scoured NASA's film vaults, coming away with a treasure trove of archival footage. Gone are the overused, iconic images so familiar to all of us. The filmmakers digitally re-mastered footage sealed in bins for more than three decades, much of it of such breathtaking quality and magisterial beauty that it is almost unthinkable that it has gone unseen until now.

In the Shadow of the Moon is a shimmering tribute to the brave men who, almost half a century ago, made the unthinkable a reality. Concentrating exclusively on the Apollo Program, the documentary eschews narration and simply lets the film progress through interviews with all of the remaining Apollo astronauts, minus its "team captain" and the first man to set foot on the Moon, the notoriously camera shy Neil Armstrong. Some of the astronauts are staid and stoic, paradigms of professionalism. Others, like Alan Bean and Michael Collins, are fun and animated, like children fresh off an amusement park ride.

These are the coolest guys alive, yet you'd never ...

Join in on Facebook
Tags:
None
Posted:
September 7, 2007
More From:
Brandon Fibbs 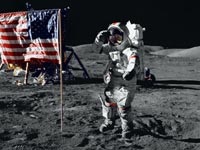