A fan at a recent Atlanta concert is profoundly affected by Steven Curtis Chapman's moving testimony, sharing his grief over his daughter's tragic death.
Mark GeilAugust 11, 2008

There comes a time following unspeakable personal tragedy when one must return to some aspect of normalcy. Simple actions like doing the dishes and driving the car again can be triumphs in the process of grief and recovery. Going back to work seems the ultimate signal to the world that life will go on, even when life is forever changed.

Steven Curtis Chapman is back to work, an act that he thought might never happen following the tragic loss of his five-year-old daughter, Maria Sue. He's performing again, and that's a good thing. It's what he is wired to do, and for him, at this time, is a mixture of celebration, reflection, and catharsis in a strangely public way.

Chapman's August 2nd concert at Turner Field in Atlanta was extraordinary for a number of reasons. His family was in attendance for the first time since the accident. His wife Mary Beth stood on a distant concourse with daughters Emily, Shaohannah, and Stevey Joy. Sons Caleb and Will were supposed to be onstage, performing with Dad, but instead they watched from just offstage, due to another extraordinary circumstance: a massive electrical storm coloring the sky just before the show.

The Braves game ended under clear blue skies, and the stages were quickly assembled just in front of the dugout on the first base line. But as local Christian radio DJs made their introductions and commercial spots aired on the big screen, the sky grew steadily darker as grounds crew rolled out their massive tarp just as opening act Jonny Diaz (brother of Braves player Matt Diaz) took the stage. The show up above became as compelling as the one on stage, as Diaz bravely performed one song before introducing his brother, who bravely gave a three-sentence testimony before introducing Braves ... 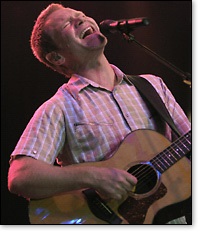