A new documentary shows stories of forgiveness and reconciliation in a nation still reeling from the horrors of genocide.
by Susan Wunderink |August 19, 2008

John enters the room with his hands clasped high on his chest. He sits across from Chantale and begins the conversation they both have been afraid of for years.

"I did a terrible thing to you by killing your father, who was my neighbor and my friend," John says. "I had even helped prepare the feast when he received confirmation in the church. But the evil one invaded my life, and I committed this horrible crime of killing your father. I'm falling before you, begging for mercy for the crime I committed."

John, one of the perpetrators of the 1994 Rwandan genocide that left over 1 million dead, doesn't get much sympathy—much less mercy—from his victim.

Chantale, still grieving the loss of her father all these years later, looks straight at John and says calmly, "It was meaningless to have you arrested. I regret that."

There would be no forgiveness that day. Perhaps later.

So goes one of the powerful scenes in As We Forgive, a new documentary by Laura Waters Hinson, who followed John and Chantale and others to tell the remarkable story of reconciliation taking place—slowly but surely—in Rwanda. 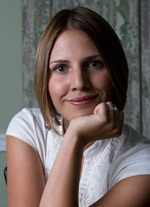 While on a church exchange trip to Rwanda in 2005, Hinson learned that some perpetrators of the genocide—more than 50,000 of them, including John, were freed from prison without trial—were building houses for their victims.

Rwanda is densely populated, with more than 10 million living in an area smaller than Maryland. So, Hinson says, "For a murderer to be released from prison to go home, he was really going to be shoulder to shoulder with people whose families he killed."

Hinson, a budding young filmmaker, wanted to tell those stories, but when she returned less than a year later with a camera crew, she found out she'd missed the whole thing. The houses were finished, and the owners had taken possession.

"I wanted to depict people in the process of reconciliation rather than tell about a reconciliation that had already happened," says Hinson, 29. "I knew that to have a powerful film, you need to show something happening in transition, progress being made before the camera."

Hinson had to scrap Plan A for the narrative arc of As We Forgive, a documentary about reconciliation in Rwanda, but certainly the power of the project was not lost as she and her team began to probe for other stories, like John and Chantale's.

In fact, Hinson's film won the Gold award in the documentary category of this year's Student Academy Awards, Best Documentary at the Angelus Student Film Festival, and it's about to go on tour with the National Geographic All Roads Film Project. The Congressional Black Caucus will host a screening of the film for senators, the World Bank showed it, and dozens of churches have shown it and hosted discussions on forgiveness and reconciliation with community members. Additionally, Hinson has recently partnered with Prison Fellowship International to establish the Living Bricks campaign, where viewers can donate directly to a Rwandan house building project.

Meanwhile, more plans are in the works to get the hour-long documentary broadcast in the U.S. Hinson is also working with Saddleback Church as they develop their reconciliation campaign in southern Rwanda. And Hinson's two-person production company, Image Bearer Pictures, doesn't even have a PR person.

Hinson knows she's on to something. "I feel like I'm just at the beginning of this thing. And the film isn't even formally distributed yet."

The behind-the-scenes hero of Hinson's story may well be Emmanuel Kwizera, Hinson's driver/translator/ambassador. "He ended up being the key to our entire shoot," says Hinson. "He would go into the homes of these widows who had lost everything in their lives—their children had been slaughtered, their husbands had been shot in the head or macheted to death, clubbed to death.

"He would listen to their story and empathize and sometimes he would pray with them, and then he would say, 'Let me tell you about the muzungus [white people] I'm working with.'" He invariably convinced them that this was a project they would want to be a part of.

With four weeks and a shoestring budget, that kind of efficiency was necessary. "It ended up being a beautiful shoot because we all just worked so effortlessly together," Hinson says. But there wasn't really time to process the enormity of genocide. "When I was in Rwanda, I really had to kind of shut down in order to move through it. Whereas my friend, my roommate, cried through the whole thing. And in a way I lived vicariously through her mourning."

Rwanda's president Emmanuel Kagame, who is notoriously difficult to schedule an interview with, also granted the film crew a half-hour interview the day their flight was to depart. Hinson laughs, remembering the scene: After a half-hour interview, "I was sitting there in my dirty shirt and my Chacos and my dusty capri pants," being served a hot lunch on gold-rimmed plates because the President's assistant had called them at lunchtime. "We were completely exhilarated," said Hinson. "It just confirmed that it was an experience I felt was being divinely led."

Back in Washington D.C., Hinson got to work editing the film, shaping it to be something other than a simplistic or maudlin "Christian propaganda film."

She also wants the film to reach a secular audience. For this reason, she and her friend, Catherine Claire Larson, who wrote Zondervan's As We Forgive, a 2009 book based in part on the stories Hinson discovered in Rwanda, may not promote their projects together. (Zondervan aims more for the Christian market.)

Hinson's film focuses on three stories of murderers and victims of Rwanda's genocide: Nemeye Saveri and Rosaria Bankundiye, who had reconciled; John Nzabonimpa and Chantale Ukebereyinfura, who had not; and Joy Munyana, a genocide orphan who says she and her classmates no longer acknowledge Hutu/Tutsi designations.

The presence of the filmmakers is so light that when self-conscious John looks at the camera, it feels like he's looking at you. And when un-self-conscious Chantale, John's victim, ignores the camera completely, the documentary frame dissolves.

The subjects speak frankly about the genocide, about who killed and who was killed. Both John and Saveri have repented for their participation in the murders, but they also talk about it as a fact of life. They also admit that this hasn't eased the matter. Both John and Chantale admit that certain killing sites have a special horror for them. John, standing on the site of the house where he dragged Chantale's father to his death, said, "The house that was here was demolished by its owner. When I pass by this place I get chills and I feel terrified."

As We Forgive avoids preachiness and allows Chantale to make some convincing arguments that forgiveness won't change much. It doesn't spell out the obvious: that the subjects who have experienced reconciliation look about ten times as healthy and confident as those who haven't.

But by the end of the film, all of the film's subjects are on the reconciliation bandwagon. Hinson says this doesn't necessarily reflect the average situation. "I think there are lot of people who say that they've reconciled, but I think what it means is that they're just not killing each other. I think a much smaller number, a minority that is truly engaged in authentic reconciliation where real healing is happening." One of the factors is that the government—which Hinson describes as "not fully democratic"—is pushing reconciliation.

As We Forgive portrays the killers and the victims as appealing, believable, and fallible characters. Those elements become important as, in the last section of the film, Reinhold Niebuhr's quote, "Forgiveness is the final form of love," flashes across the screen.

"I think you can have practical forgiveness where you say, 'I will forgive you so I can be released from this anger,'" says Hinson. "But that's not the same as reconciliation. Forgiveness is simply a giving up of your right to be angry. Reconciliation goes a step further and is a restoration of the relationship between the person who's been aggrieved and the perpetrator. In the case of Rwanda, I don't think it's possible for people to reconcile without a relationship with God."

"How can I refuse to forgive when I'm a forgiven sinner too? According to God's Word, I am called to forgive [the killer], for I did not create this man," Rosaria says in the film. "Even my family that he killed—I did not create them either. His crime was against God, who created the people he killed. So I placed everything in the hands of God."

Rosaria's own hands still don't work properly after the machete attack she survived in 1994, and As We Forgive picks up her story as she wonders how she will winnow her crop of sorghum. Saveri, the man who killed Rosaria's sister, is one of those who comes to help her so that she could move into the new house that he and other freed prisoners had built.

The film's main subjects—Rosaria, Saveri, Chantale, John, and Joy—are deeply aware of the significance of what they say and do. (At one point, Saveri, who admits to killing seven people during the genocide, says, "I did not believe there could be any deliverance for me." Such simple yet profound statements are what makes them such great teachers—and what makes the film such a significant accomplishment.

Hinson is aware of this: "My greatest hope is that God would use [As We Forgive] to bring about reconciliation on multiple levels in this broken world." She means not just those who lived through genocide, but also those who cannot comprehend it.

"This is the most incredible example of faith and courage and the resiliency of the human spirit that I've ever heard," Hinson says of the reconciliation efforts in Rwanda. "And I want people to be transformed by that and to believe that it's possible in their own lives. If Rwandans can forgive those who've slaughtered their own families, how much more can we forgive the small offenses in our lives?"