Kate Winslet has played any number of feisty, intelligent women over the years. Even when she plays a bored suburban housewife, in films like Little Children and Revolutionary Road, her characters tend to believe that they are somehow better and smarter than their neighbors—and on some level, they often are. So it comes as a bit of a shock to see Winslet in a role where her character doesn't seem to be all that bright, really, and where her character ultimately wants to be regarded as anything but exceptional. But that describes Hanna Schmitz, the role Winslet plays in The Reader, a film that is partly about a woman who lives in post-war Germany, and whose past involvement in Nazi atrocities eventually catches up with her.

There is more to the story than that, though. Based on a novel by Bernhard Schlink—which was selected for the Oprah Book Club in 1999—the film is also about a teenaged boy who has an affair with this woman despite knowing nothing about her, and then, after learning about her past, is forced to look at their relationship in a new and more disturbing light. While the bulk of the story is set in the late 1950s and 1960s, it is told from the point of view of Michael Berg when he is an adult (played by Ralph Fiennes), living in the 1990s and looking back on the fling he had with Hanna when he was just a teenager (David Kross).

The young Michael meets Hanna essentially by accident. First he gets sick on a tram, and she, being a tram conductor, comes to his aid. Later, after he has recovered from his illness, he returns to her apartment to thank her for her help, and he happens to catch a glimpse of her partly naked. She notices that he has seen her, and before long, on one of his subsequent visits, ... 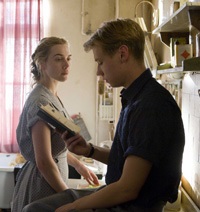