Po is a Chinese noodle shop worker whose consuming passion is kung fu. There are only a few obstacles standing in the way of his dream of becoming a martial arts master. 1) His father expects him to take over the family restaurant. 2) He doesn't actually know kung fu. And 3) He's a panda. And a portly, sluggish, uncoordinated one at that.

But Po is the protagonist of a children's movie, and just the sort of underdog (under-bear?) that families love to cheer for. Fortunately for the movie, he's also funny, likable, and supremely well animated.

Po lives in an ancient Chinese town (The Valley of Peace) populated exclusively by talking animals. His heroes are the "Furious Five," a group of martial arts masters who just happen to embody the five animal forms traditionally taught in Shen Lung Kung Fu: monkey, mantis, crane, snake and tigress. When word comes that the village's deadly archenemy, an incredibly powerful and vicious snow leopard named Tai Lung, is expected to attack, the Wise Master Oogway (a very old turtle, naturally) decrees that it is time for an ancient prophecy to be fulfilled. One skilled individual will become the "Dragon Warrior" and realize his destiny by defeating Tai Lung. Will it be Monkey, Mantis, Crane, Viper the Snake, or Tigress? When the selection ritual begins, Po exerts a great deal of effort trying to scale the courtyard wall in order to watch the proceedings. Through a series of slapstick mishaps, he inadvertently finds himself designated the Chosen One. Hilarity—and lots and lots of really cool fighting—ensues.

The oafish-guy-attempts-a-lithe-sport premise has been mined before, most similarly in Beverly Hills Ninja, a fairly awful Chris Farley vehicle that managed to stomp all the ... 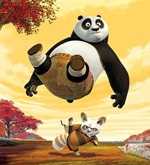