All you really need to know about 21 is shown in the (excessively) stylish opening prologue before the credits. It's a foretaste of what's to come later in the film—not just the general plot details, the narration, and the visual style, but even some of the "how" that will bring us to that point. You could say 21 reveals its cards too early.

Not that you haven't seen movies like this before. It's become a genre unto itself in the last 20 years, which, for now, I'll refer to as MMM—the Misleading Mentor Movie. Young man looking for big break struggles to make ends meet, becomes persuaded by charismatic Svengali to enter the high stakes world of [fill in the blank], only to confront his core of ethics amidst his runaway success. We've seen it applied to a numerous trades: the stock market (Wall Street), bartending (Cocktail), pool hustling (The Color of Money), investments (Boiler Room), and sports betting (Two for the Money), to name a few. Here, it's set in the world of casino blackjack.

21 is based on Ben Mezrich's best-selling book Bringing Down the House, which in turn was inspired by the true story of Jeff Ma, who, along with a team of fellow M.I.T. students, developed an intricate system for card counting in blackjack. Contrary to popular belief, card counting is not illegal—provided no added technology or outside device is being used—but the strategy is strongly discouraged by casinos since it can lose them lots of money. In the case of Ma and his buddies, they were beating casinos for hundreds of thousands of dollars at a time.

A premise with strong potential, but here it's applied to familiar MMM conventions. Jim Sturgess (Across the Universe) sheds his British accent to play Ben Campbell, a pre-med student at M.I.T. who has been accepted to Harvard Medical School. Problem is, he doesn't have the money to follow through on his dream—certainly not by working at the local men's clothing store. But his math and memory skills attract the attention of his charismatic professor Micky Rosa (co-producer Kevin Spacey), who invites Ben to join his team of specialized students, conveniently including Jill Taylor (Kate Bosworth), whom Ben has a crush on.

Together, they head to Vegas on weekends with a setup worthy of Mission: Impossible. The students play blackjack conservatively at various tables, monitoring the number of high cards left in the deck. When the table is hot—rife with tens and aces —they signal their "big player," wandering between tables to place high bets at the right time. This is where the film is engrossing, demonstrating the tricks of the trade.

As proven by Ma and his cohorts back in the mid '90s, the strategy works—unless, of course, the casino finds you out. In real life, the MIT students were simply asked to leave when caught by casino security, and they eventually gave their scheme up with the development of video technology that runs faces through a computer database of known counters. In the film, security man Cole Williams (Laurence Fishburne) hauls counters into the casino basement and discourages them from playing by pummeling them.

That's just one way in which 21 gets the Hollywood treatment. Director Robert Luketic (Legally Blonde, Monster-in-Law) floods the film with flashy camera work and lighting in effort to pump up the excitement of blackjack and the excess of Vegas. There are also enough music video montages to recall Sturgess in Across the Universe, or at least one of the soundtrack-heavy '80s films from which 21 seems derived. 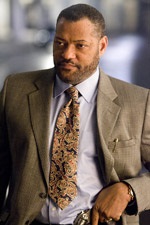 Though it would have been nice if the movie stayed on point, blackjack isn't nearly as suspenseful on screen as poker is. Out of necessity, the focus shifts to the characters, their relationships, and their wild lifestyle. Unfortunately, none of it is remotely as interesting as the scam itself, at least not in this overly clichéd script.

At least they didn't make Ben out to be saintly and altruistic with a sick parent or something. But he is a rather shy and naïve nerd whose father passed away years ago and whose mother scrapes by as a barmaid at a local tavern. And he keeps busy working with two much nerdier but cheerful friends in developing a robotic wheel for a school competition. They generally exist so that Ben can rudely ignore them later when he's busy playing cards. ("I thought we were your friends, man."—See? Writing this script is easy!)

Just about everyone else on the team is a thin caricature. Choi is nothing more than a snarky guy with a habit of stealing everything from the hotel that isn't nailed down. Fisher is Ben's rival, becoming jealous and reckless only because the script calls for it, not because he has an actual falling out with the protagonist. Kianna is, well, the other girl on the team besides Jill. And Jill is Ben's inconsistent love interest, starting out seductive and fully buying into the Vegas lifestyle, but then later decrying it, apparently to become the moral center for Ben to play off of when he descends into temptation. 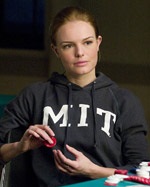 Such inconsistency keeps this drama from becoming believable. The team gets into trouble not because they aren't smart enough to beat the system, but because they're too dumb to avoid drawing attention. Kindly Professor Rosa drinks and fraternizes with the kids in Vegas, but suddenly turns malicious after just one screw-up from Ben.

For that matter, why is Ben too ordinary to beat the competition for a Harvard scholarship, yet special enough among all the students at MIT for the blackjack team to aggressively pursue him alone? Is it because he's smart enough to take classes in mathematical probabilities while majoring in pre-med and designing robots? And if he's that smart, then why is he storing hundreds of thousands of dollars in his dorm room crawlspace? Why, to serve the script, of course, so he can lose it all later. Seriously Ben, it's called a bank—look into it.

21 is certainly watchable, and there's a twist or two that that I didn't see coming, probably because by that point I had written the movie off as too dumb to attempt anything of the sort. Yet in spite of the story's shortcomings, the underlying crash course in card counting is intriguing. The dialogue is runs the gamut from clunky to clever. And though Luketic's direction and visuals are often over the top, it's anything but boring.

This film is as uneven as the average player's luck in blackjack (aside from card counting, of course). There are some fun moments, but when it's all said and done, 21 should have followed Sin City's cardinal rule: What happens in Vegas stays in Vegas.