CT Movies visited the set of a new film about the life of Billy Graham, focusing on his early years and call to the ministry, which recently finished filming in Nashville.
Photos by Katherine Bomboy|May 27, 2008

Editor's note: Since this story was posted, the film has been given a release date of October 10, 2008.

Billy Graham's life story has been told a number of ways through various media, but filmmaker Bill McKay wanted to tell it a little differently: From the perspective of a non-believer.

So, for Billy: The Early Years—tentatively slated for release this fall—McKay tells the evangelist's story from the viewpoint of a dying Charles Templeton. As a young man, Templeton had been one of Graham's friends and colleagues in Youth for Christ, only to later turn his back on his faith, becoming an agnostic.

Thus, as Salieri told Amadeus' story, so does Templeton—played by Oscar winner Martin Landau—tell Graham's, reminiscing from his deathbed.

"I wanted to tell Billy's life through the prism and experience of an atheist," said McKay, the film's writer and producer. "I think we have a film that will make an impact."

McKay's mother, Marjorie Bostrom, was a roommate with Ruth Bell at Wheaton College in 1941. Bell went on to marry Billy Graham, another Wheaton student at the time, and McKay's family and Graham's family occasionally stayed in touch over the years.

The new movie was filmed during April and May in and around Nashville, Tennessee. Filmmakers are currently in post-production, hurriedly editing away. McKay has said that he wants to finish the movie quickly, so it can be released while the ailing Graham, who turns 90 this fall, is still with us.

Billy: The Early Years, starring up-and-coming actor Armie Hammer in the title role, covers Graham's life from his salvation experience at a 1934 tent revival in Charlotte, North Carolina, through moments of uncertainty concerning his calling, before coming full circle ... 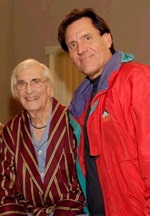