When Sex and the City finished its sixth and final season on HBO in 2004, popular sex-columnist and book author Carrie Bradshaw (Sarah Jessica Parker) had finally heard Mr. Big (Chris Noth) tell her she's The One. Sex-crazed P.R. guru Samantha Jones (Kim Cattrall) had beaten breast cancer and fallen into a monogamous relationship with her hot young boyfriend, Smith (Jason Lewis). Socialite and uber-optimist Charlotte York (Kristin Davis) and her hubby Harry (Evan Handler) were adopting a little girl from China. And snarky workaholic Miranda Hobbes (Cynthia Nixon) had moved to Brooklyn with her husband, Steve (David Eigenberg), and their son, Brady. The series finale (and, arguably, the entire series) was a celebration of friendship, self, and romantic love—mostly in that order.

This big screen reunion, which takes place four years later, celebrates much of the same (and more). And, like the TV series, the film offers much that will resonate with singles—and yes, even Christians—who see themselves not just as a demographic in a Barna poll but as sexual beings who wrestle with balancing loneliness and a desire for romantic love with a commitment to purity and platitudes like "true love waits." (And waits. And waits.) More on that in a moment, but first, let's catch up with the main characters.

Carrie, who's recently released her third book, and Big are moving into a Fifth Avenue penthouse that redefines spacious. When Carrie attends the jewelry auction of a jilted socialite, she starts to crave something a bit more concrete with Big before they share an address. Her casual mention of marriage prompts a passionless quasi-proposal. Wedding plans go from intimate to production when Carrie lands the perfect dress. Big starts to squirm, and so do we (especially fans of the TV show, who have ventured down this road too many times before).

Samantha has left NYC (horrors!) for L.A., where Smith is now a big-time actor and her star P.R. client. Their beachfront home is an altar to Smith's stunning success. It also happens to be right next door to a hot Latin surfer, who provides a world of temptation for Sam. She escapes him and her domestic boredom with frequent trips to New York. (One has to wonder if her relocation was to provide less interaction with the other actresses, with whom Cattrall has had a shaky history.)

Charlotte is adding to her domestic bliss with the discovery of her surprise pregnancy. She can only hope the baby will be as well-behaved as her adopted daughter, Lily, who seems more like a cute Asian accessory than an actual, living, sippy-cup-spilling child. Charlotte struggles to enjoy her happiness when her friends are wrestling. As usual, Charlotte offers the weakest plot line—yet we need her joy to balance out the others' angst.

Miranda is struggling as a working mom, wearing the role like an ill-fitting school uniform. She's as angry and biting as ever, with Steve serving as her main whipping boy. When he betrays Miranda, she erupts—and finally moves back to "more civilized" Manhattan with her son. Miranda's story is probably the most relatable to mere non-Prada-sporting mortals—and is also the most well defined and interesting.

New to the mix this time is Louise (Jennifer Hudson), a young woman from St. Louis who recently moved to the Big Apple "to fall in love." Carrie hires her as an assistant to help her get her life, apartment, and website in order—and she also offers some starry-eyed optimism just when Carrie needs it. While Hudson was no doubt added to the cast in response to criticism that SATC was sorely lacking in women of color, it's unfortunate she's cast as aide instead of a friend. Why not let the girl sit at the grown-ups' table instead of being stuck serving them and lustfully eyeing their designer labels?

The overall plot mainly revolves around Carrie and Big (will he or won't he flake out?) and around Miranda (will she or won't she forgive Steve?). Throughout this year-long (and sometimes overlong) slice of life, the women wrestle with issues of forgiveness, identity, temptation, and guilt. Then occasionally the action pauses for a gratuitous fashion show—thanks to a magazine shoot, a closet cleaning, NYC's Fashion Week. It's like stopping for ice cream in the middle of your workday. Fans of the show will eat this up; the husbands and boyfriends they drag along likely not so much. In the midst of all the Gucci and the grappling, Carrie, Miranda, Charlotte, and Samantha love, protect, and occasionally attack each other with stunning ferocity. 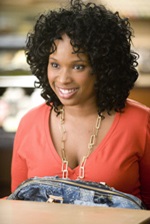 Michael Patrick King, executive producer and writer of the television series, wrote and directed this film. His story does provide big-screen-worthy events in the lives of the girls—birth, loss, marriage—though all of these occurred in the series as well. The package suffers without Carrie's usual wrestling with and posing of an intriguing question. Those queries often elevated the show from mere fashionable fluff or soft-core porn. Though many viewers were no doubt drawn by the sex or the sisterhood or the shoes, it was Carrie's thought-provoking, vulnerable, and relatable wrestling with life that made the show not just popular, but a pop-culture phenomenon.

And a phenomenon even for many Christians. For years, good churchgoing friends of mine secretly raved about Sex and the City. They told me that I, a 30-something single woman (and a singles columnist to boot), would appreciate the randy little show. I was a late adopter only because I didn't have cable. When the somewhat sanitized version showed up on WGN, I was intrigued. I could've done without the "man-izing"—and definitely without the nudity, when I rented the original version. But it was refreshing to have a single woman's sexuality acknowledged. In stark contrast, the last time anyone in a Christian setting spoke to the fact that I'm a sexual human being was in a college church group, where I was blithely instructed that "true love waits." Well, 15 years later, it's still waiting. And it ain't so blithely simple.

Most of the few Christian voices speaking to the growing single segment of the population offer ten easy steps to find our soulmate. As if it's that wondrously simple. Carrie, Samantha, Charlotte, and Miranda, however, show how challenging it really can be for intelligent, accomplished, and admittedly neurotic women to find lasting love. They, unlike many Christians, don't insult my intelligence. Instead they speak to the complexities of relationships in a postmodern age—addressing baby lust, the mommy wars, sexual temptation, dating outside your "class," commitment-phobia, the reluctant desire to be rescued by a man, and the simultaneous fear that you'll lose your own hard-won identity in the process. Yes, materialism and hedonism abound. But so does a messy wrestling with complex new realities of life that I wish I saw more of in Christian circles. 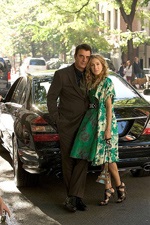 Sex and the City is ambitious for all the characters, emotions, and crises it tries to shoehorn into two and a half hours. But the attempt elevates it above most chick flicks and romantic dramedies of late. SATC offers well-developed characters, smart dialogue, interesting plots and sub-plots, and a ton of heart. Not to mention eye-candy galore in the leading men and odd-yet-fabulous fashions. Still, I personally wasn't satisfied with the way the Carrie-Big plotline played out. And I think the franchise shines best when showcasing the characters' little, daily struggles and neuroses—Why hasn't he called? Is he really just not that into me?—as it did on the TV show than when trying to make bigger statements (both of the relationship and fashion varieties) as it does here.

In the end, I didn't quite heart SATC—but I certainly enjoyed this meaningful reunion with its beloved characters and their winning friendships.