Surfwise is the second surfing documentary to come out in the last month (the other being the Russell Crowe-narrated Bra Boys, about Sydney surfer gangs). Both films are about people more than they are about surfing, and both examine questions of family, community, and brotherhood against the backdrop of big waves.

Surfwise, directed by Doug Pray, probably belongs more to the "dysfunctional family" documentary genre than it does the sports movie. It feels closer in spirit to films like Capturing the Friedmans or the Up series than to the sort of feel-good sports featurette you might see on ESPN or before the Olympics. 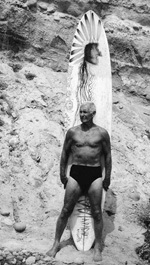 In many ways, Surfwise is a biographical memoir—a probing look at the life and legacy of one very singular man: Dorian "Doc" Paskowitz, now 85 years old and still surfing every day. The film begins with Dorian (who describes himself as "one of the few dumb Jewish doctors you will ever meet") recounting his tumultuous early life: his medical education at Stanford, his early adoption of the sport of surfing, and his first two failed marriages. One day in 1956 he decided to make a change in his life and drop all illusions of being a "real person." He took a trip to Israel and spent a year wandering the desert like Jesus, tried (and failed) to join the Israeli military, then embarked on a licentious odyssey of sexual freedom which culminated in his marrying his third (and current) wife, Juliette.

Things only got stranger from here. He and wife Juliette bought an RV, took to the highways, and started having babies: nine total when all was said and done. For much of the 1960s and 70s, the family lived together out of this camper, traveling around the country to surf and frolic and, well, just be a family. The kids never went to school, never had any semblance of normal social interaction, and were subjected to strict physical and dietary regimes driven by Dorian's mantra: "Eat healthy, live clean, surf clean." It's the sort of scenario child services would jump on in an instant: two parents and nine truant children (eight boys and one girl) living together in a cramped 24-foot RV, sharing one bathroom, scavenging for food, living as animals in the wild.  "I just wanted my kids around me, surfing with me," explains Dorian. "Education be damned."

The Paskowitz family, circa 1976

This curious living situation, combined with Dorian's already-established name in the surfing world, made the Paskowitz family something of a media sensation: a novelty family somewhere between the von Trapps and the Swiss Family Robinson. Naturally, the kids became great surfers, collecting junior competition trophies by the truckload and becoming something of a surfing dynasty. Several of the boys eventually went pro and made careers out of surfing tours, endorsements, etc. The family also started a summer surf camp that still exists today.

The most striking thing about Surfwise, however, is the way that it represents the dynamics (social, psychological, spiritual) of family: how, for instance, one man with a strong personality and elevated ego can exert his vision, for good and ill, on his bevy of offspring. Dorian comes across as a very selfish man with an idea of what life should be, a man who forces his nine children to live according to his very unconventional framework. He views man as no greater than gorillas, believing that to live in the wild and commune with nature (i.e., surfing) is the truest existence possible. This very secular, biological outlook on humanity doesn't seem congruent with other aspects of his life, however. For example, he takes his Jewishness very seriously and instructs his kids in the faith, though it isn't clear how orthodox a faith it actually was. In fact, Dorian admits early on to the camera that "I don't have the faintest idea who God is." For him, religion is family, and sex, and living in the wild.

As complex a person as Dorian appears to be, he ultimately seems more confused than anything: a sort of free-living hedonist ("I don't take any medicine!") with some affinity for religion but ultimately an outlook on life that is very self-serving. The odd, difficult life he imposed on his children almost seems to be some experiment meant to test his existential hypothesis. It's clear he loves his wife and children, but his actions toward them suggest an ignorance (or at least carelessness) about how they might be affected in the long term. According to the children, for example, Dorian and Juliette would have noisy sex every night in the camper, even with the nine children (some adolescents, some toddlers) trying to sleep just feet away. In keeping with his view of the world, Dorian justifies this by saying that primitive cultures lived in communal dwellings and sex was not considered a private or embarrassing act. Nevertheless, the children admit to being scarred by those experiences.

Indeed, the last (and best) third of the film focuses on the grown-up children and their struggles to live "real" lives.  Most of them didn't leave "home" until their early twenties, and naturally (having never been to school) they found it difficult to adjust to the real world. Some of them became pro surfers, some of them musicians and filmmakers, but all of them felt the unalterable impact of their father. Many of the children became estranged from their parents and each other, and only in the final scene of the film (a reunion in Hawaii that comes across as a convenient setup) does the family come together in some semblance of reconciliation. Indeed, even Dorian seems to come around to seeing his own mistakes by the end, recognizing how he failed his children in attempts to harness them to his ideals: "A real man," concludes Dorian, "is capable of controlling himself before he controls his children."

Surfwise is a compelling film, and at times emotionally affecting; but occasionally it feels a little all-over-the-place in terms of themes and ideas. The narrative is structured in a pretty straightforward documentary fashion (talking head interviews, great archival footage and pictures, etc.), but the take-away message is a bit harder to pin down. Are we to take this as just an isolated instance of a crazy, bohemian family? Or is this a representative of how messed-up all of our families actually are? There are a lot of unanswered questions too. I was interested to know more about the Jewish aspect of the Paskowitz family, and how it played in to their collective identity and psychoses. A stronger development of some of the children's characters (granted, there are nine!) also would have been nice.

Overall, though, Surfwise does what a documentary should do: it investigates a specific curiosity of existence (in this case, a very curious family) and attempts to understand it. When so many documentaries today seem concerned only with arguing a point, it's nice to see something like this which seeks only to reveal.

Surfwise is rated R for language and some sexual material. There's quite a bit of profanity and some very frank discussions of sexuality. At one point we hear Dorian recount his "sexual awakening" and describe a stretch of time when he slept with more than 25 women and rated them on a scale of 1-100. His very detached, biological approach to the human body and sexuality comes up frequently in the film, and may be considered offensive.