Recent remarks on emergent and emerging, female pastors, and other news developments.
Compiled by Ted OlsenOctober 29, 2008
This article is from the November 2008 issue. Subscribers can read all of CT's digital archives.

"The definition has changed. I … [am] wedded to the gospel and to Jesus' command of making new disciples—not a term to describe it."
Dan Kimball, author of The Emerging Church, explaining why he is moving away from the use of emergent and emerging.
(Source: DanKimball.com)

"We weren't trying to pick a fight. We just did a story on an emerging trend in a lot of churches."
Teresa Hairston, owner of Gospel Today magazine, which was removed from the racks of LifeWay Christian Stores because it featured female pastors on its September/October cover.
(Source: The Atlanta Journal-Constitution)

"Crusade is a dramatic word, while 'Penn Students for Christ' leaves us to decide what we are about."
Jordan Regan, a leader of Campus Crusade for Christ's chapter at the University of Pennsylvania, on why it is joining several other chapters in changing its name.
(Source: The Daily Pennsylvanian)

"It is hardly startling that a city with the name 'The Crosses' would be represented by a seal containing crosses."
The U.S. 10th Circuit Court of Appeals, affirming the dismissal of a lawsuit against the City of Las Cruces, New Mexico. Residents Paul Weinbaum and Martin Boyd had argued that the city was promoting Christianity by using three crosses on logos and buildings.
(Source: Findlaw.com)

"I prayed hard and tried for 30-some years and then at the end, I was just going, 'I'm still gay. I know I am.' And I just got to the place where I couldn't take it anymore."
Ray Boltz, on his divorce and coming out. Boltz, who sold about 4.5 million albums in his Christian music career with such hits as "Thank You," says he lives "a normal gay life" now.
(Source: Washington Blade) 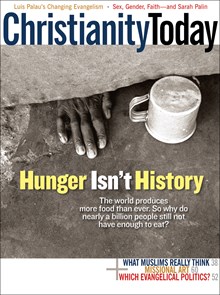