When asked to name his three favorite directors, Orson Welles answered, "John Ford, John Ford, and John Ford." Ingmar Bergman dubbed Ford the greatest director who ever lived. The only director to win four Best Director Academy Awards, Ford was also the first recipient of the American Film Institute Life Achievement Award, and was awarded the Presidential Medal of Freedom, both in 1973, the year he died.

Ford claimed to be a practicing Catholic all his life, though his bouts with alcoholism caused his devotion to waver. But his faith evident as late as the 1960s when he gave his rosary beads to an interviewer who described himself as an atheist and communist. Ford's grandson and biographer Dan Ford states that Ford's "simple faith in Jesus Christ was a comfort to him in his last days."

But when it came to making films, Ford was no Bresson ascetic, but wholeheartedly a man of the flesh, depicting with relish feasts, saloons, barroom brawls, dancing, and music. Especially music. Music inspired him. He played period music as he wrote and planned his films, and even played some songs on the set to capture the tone; many of the songs wound up on his soundtracks and even in the titles of the films.

Born John Martin Feeney in 1894 in Maine, symbols of Ford's Irish heritage and Catholic religious tradition manifest themselves often in his films, as does his devotion to the foremost of American historical Christ figures: Abraham Lincoln. In Young Mr. Lincoln (1939), Ford chose to film Lincoln's early days, making him more human than most other portraits on film of our nation's great President.

Ford was an average student, but an avid reader with a vivid imagination. Throughout his life, he made up stories about himself ... 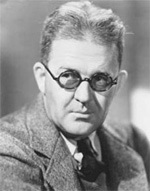