The Only 'Christian Nation'

There is no single best way to run a country.
John Calvin with Knox Bucer-BezaAugust 7, 2009
This article is from the August 2009 issue. Subscribers can read all of CT's digital archives.

The decline and fall of the modern religious right's notion of a Christian America creates a calmer political environment and, for many believers, may help open the way for a more theologically serious religious life.Jon Meacham, "The End of Christian America," Newsweek, April 13, 2009

The ascended christ reigns over the church and all societies but in different ways. In truth, the only "Christian nation" is the body of Christ as it is dispersed throughout all peoples and in all times. Confusion on this point has resulted in far-reaching consequences.

"Christendom" is a contrived empire. I would have preferred to pass over this matter in utter silence if I were not aware that here many dangerously go astray in our day. For there are some who deny that a commonwealth is duly framed that neglects the political system of Moses, and is ruled by the common laws of nations. Let other men consider how perilous and seditious this notion is; it will be enough for me to have proved it false and foolish.

God planted into the human conscience from creation the precepts of his moral law. In fact, what we call the moral law of God is simply the testimony of this natural law. Consequently, the laws of nations today are to be governed by the principle of equity: justice tempered by friendly love. It is not the ethic of the kingdom of Christ, but it is a genuine civility of which even unbelievers are capable in this age. Whatever laws shall be framed to this rule of equity, we should not disapprove of them even if they differ greatly from the laws of the old covenant or even from nation to nation. There is a variety of ages, conditions, histories, and cultures that require different laws and constitutions.

Therefore, it would be malicious toward ...

Re-Formed
To commemorate the 500th birthday of John Calvin in 2009, Christianity Today published a bimonthly column adapted and paraphrased from Institutes of the Christian Religion. It was ghostwritten by Michael Horton, professor of theology and apologetics at Westminster Seminary California, and editor-in-chief of Modern Reformation magazine.
Previous Re-Formed Columns:

The Only 'Christian Nation'

The Only 'Christian Nation'
expand
hide this 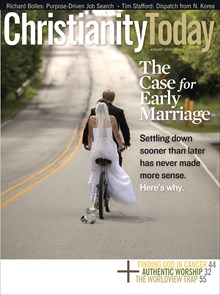 This article is from the August 2009 print issue. Subscribe to continue reading.