An epic guitar doc that isn't as epic as it might have been, but still pretty cool
Brett McCracken|August 21, 2009
Our Rating

Directed by Davis Guggenheim (who won an Academy Award in 2006 for An Inconvenient Truth), It Might Get Loud follows a trio of iconic electric guitarists who, though probably not the best three guitarists in the world, are certainly three worthy ambassadors for the craft: Jimmy Page (of Led Zeppelin), The Edge (U2), and Jack White (The White Stripes and The Raconteurs). The film weaves a lyrical, artsy web of vignette, history, interview, and archival footage as we explore the meaning and beauty of the electric guitar through the lives of three of its most prolific practitioners.

The three men are also brought together in the film to meet for a discussion and jam session, segments of which are sprinkled at random moments throughout the documentary. Ironically, these scenes ring the most false of anything in the film. Set in some Hollywood soundstage with lights and cameras honed in on a set of couches where Page, Edge, and White trade stories and pluck away at an awkward acoustic rendition of "The Weight" (I pulled in to Nazareth, I was feelin' half past dead), this cosmic explosion of rockstar greatness feels disappointingly forced and phony. ... 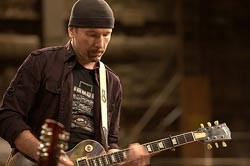