Based on a long-lost screenplay by Tennessee Williams, this Southern tale of the 1920s fails to sparkle.
Alissa WilkinsonDecember 30, 2009
Our Rating

The Roaring Twenties have arrived, though they have not quite reached Memphis and its lazily drooping willows—but you can smell the change in the air. Fisher Willow (Bryce Dallas Howard), daughter of a wealthy Tennessee plantation owner, has recently returned from Europe, where she "completed her education," at the behest of her aunt and benefactor (Ann-Margret). In customary 1920s fashion, Fisher's aunt would like her to attend the round of society parties that signify that Fisher has "come out" in Memphis social circles, and even loans her a precious pair of teardrop diamond earrings—worth ten thousand dollars.

Reluctant, but game for the amusement, Fisher agrees, and asks Jimmy Dobyne (Chris Evans) to accompany her to the parties. Jimmy is the good-looking son of a once-powerful family that has fallen on hard times—though his grandfather was a former governor, his father's a drunk employee of Fisher's father, and his mother's in an institution. He agrees to Fisher's proposition, though his pride is obviously a bit hurt. But Fisher's father, acting in his self-interest not long ago, blew up the end of the levee on his land and flooded his neighbors to the south, ruining their crops. Everyone in Memphis knows—and Fisher is decidedly not popular with the in crowd. The parties do not go well, and the invitations do not come in too fast.

So Fisher is delighted to be invited to a Halloween party at her old friend Julie's house, and drags Jimmy along, where they meet Jimmy's old flame, Vinnie (Jessica Collins). Fisher's pride is hurt, and when she loses one of her teardrop diamonds, she impetuously hurts Jimmy's pride too. But her regret is swift. She may not be in love with Memphis, but Jimmy's another ... 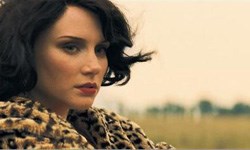