While reporting for Christianity Today on the church in southern Sudan, I was invited by local Christians on a risky ministry trip to Gangura, a village near the town of Yambio just four miles from Sudan's notorious border with eastern Congo. This is territory of the Lord's Resistance Army (LRA), a small, brutal militia fighting in northern Uganda to overthrow the government. Our guide's job description includes pointing out the evidence of past conflicts.

"This village was looted," he says. And, "That woman was abducted and released a few weeks ago." It gets worse. "Someone was killed here." Or, "Victims are buried here."

A wobbly wooden bridge brings us to Gangura. Grass-patched shelters form a semicircle around an abandoned market. Such villages are deeply embedded in the thick foliage. Villagers pop up from different directions. One of them is the chief. Since it is still early morning, tradition calls for polite inquiries. "How did you and your people sleep last night?" we ask.

He replies that his people did not sleep at all because an LRA raid occurred during the night. Some people (most likely women) who were abducted a few weeks ago have escaped into Gangura, and the LRA is furious.

"If you wait—say, an hour—they will show up," the chief says.

A World Vision security officer with us immediately says, "We have to get out of here."

One frail woman urgently tries to tell us her story. "They attacked my house and took everything."

But there is no time to listen. The risk is too high. It is time to scramble out of Gangura.

Millions have fled, millions have stayed, and millions have died in seemingly endless armed conflict. (Rebel groups and government-supported militias are largely to blame for any new violence.) ... 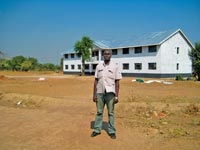