Michelle Pfeiffer stars as the most gorgeous prostitute in all of human history, but this feast for the eyes offers little for the heart.
Annie Young Frisbie|June 26, 2009
Our Rating

"All men are strange," breathes Léa de Lonval, the famed courtesan played by Michelle Pfeiffer in Chéri, the latest film by director Stephen Frears (The Queen, Dangerous Liaisons). She would know, because courtesan is just a fancy word for prostitute.

Léa has built a fortune seducing the rich and famous of France, and at the beginning of the 20th Century she is ready to retire in a palatial apartment in one of Paris's most chic arrondisements. She relishes the sensation of slipping into bed alone—yet can't shake the despair she feels over growing old.

Despite her wealth and beauty, Léa's social circle is limited because of her chosen profession. Her closest friends are her one-time competitors, chief of which is Charlotte Peloux (Kathy Bates) who lives for gossip and scandal. Charlotte lives a lavish, opulent life and dotes on her 19-year-old son Chéri (Rupert Friend), a gadfly with no thought of anything but the good life. Charlotte wants Chéri to grow up, so she turns him over to Léa to turn him into a man.

Léa is more than happy to act as a tutor of sorts to the utterly gorgeous young man, whisking him off to the south of France for what is meant to be a brief affair. To both their surprise, they stay together for six years—though neither one can admit that what they feel is love.

The couple lives in an unwedded bliss of silk sheets and shopping sprees, but Charlotte can't leave well enough alone. She may have borne Chéri in sin, but her goals for him are most proper. She wishes him to make a good marriage. And so she arranges a marriage between Chéri and the rich daughter of yet another competing courtesan. The lissome, seemingly naïve Edmée has none ... 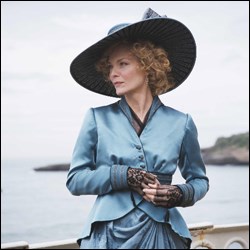