Eddie Murphy learns to connect with his young daughter in this comedy that doesn't always connect with its audience.
Lisa Ann Cockrel|June 12, 2009
Our Rating

Sometimes when I'm at a movie screening, I feel like a spy. This is especially true when I'm screening a children's movie, trying to hide behind my bucket of popcorn and hoping no one notices that a) I'm not eight years old and b) I'm scribbling notes. Of course I'm supposed to be there. The movie's publicist has even saved a seat for me. But at kids' movies, by the first time the five-year-old behind me squeals with delight at a gag that barely registered on my laugh-o-meter, I've figured out that I'm clearly not the target audience—and I start paying attention not just to the screen, but also to my fellow critics. And don't let those cherubic faces fool you. Elementary schoolers are a tough crowd.

Imagine That seeks their stamp of approval with the tale of seven-year-old Olivia, who is coping with her parents' split—and her father's scant attention—with the help of a security blanket. That blanket, draped over her head, gives her access to an imaginary world full of castles and dragons, three princesses, and one queen. And it turns out that this royal family has quite the knack for picking winning stocks. Huh?

Well, you see, the absentee dad is a stockbroker. Ah! Played by Eddie Murphy, Evan is occupied—preoccupied and postoccupied (if I can make up a word)—by his job. It's never clearly stated, but it's implied this probably has something to do with the dissolution of his marriage. And clearly it's keeping him from being a good father. He doesn't seem to have the time or the will to focus on his daughter. But it's not as though he doesn't want kids. "I just didn't know I'd be so bad at it," he tells his ex-wife (Nicole Ari Parker as Trish).

Evan finds the will to focus on his daughter when, ... 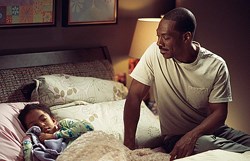