Inspired by the likes of Ozu, the Dardennes, and Bonhoeffer, filmmaker Lee Isaac Chung finds light after the darkness in Rwanda—and in himself.
By Brett McCracken|June 9, 2009

In the summer of 2006, Lee Isaac Chung went to Rwanda as a volunteer with Youth With a Mission (YWAM), the Christian ministry that his wife Valerie worked for. Chung and Valerie, who had a background in art therapy, decided that their best gift to Rwanda's youth would be to help them use art to work through the traumas and horrors they'd been through in the 1994 genocide. Chung, who studied film at the University of Utah, wanted to teach filmmaking and allow the kids to tell their own stories, "to let the culture speak for itself." The result of that summer filmmaking class was a feature film, Munyurangabo.

But Munyurangabo has since become much more than a class project. The film played at many of the world's top festivals in 2007 and 2008, including Cannes, Berlin, Toronto, London, and New York. It won the grand jury prize at the AFI Festival in 2008, and has been thoroughly praised by critics. Variety's Robert Koehler described it as an "astonishing and thoroughly masterful debut … the finest and truest film yet on the moral and emotional repercussions of the 15-year-old genocide that wracked Rwanda."

The film, now available to Film Movement subscribers (and to the rest of the public on October 6), follows two boys—Munyurangabo (Ngabo) and Sangwa—from two separate tribes as they embark together on a journey through the backroads of Rwanda. Munyurangabo wants justice for his parents who were killed in the genocide, and Sangwa wants to visit the home he deserted years ago. Though they plan to visit Sangwa's home for just a few hours, the boys stay for several days. Their friendship is tested when Sangwa's wary parents disapprove of Munyurangabo, warning that "Hutus and Tutsis are supposed to be enemies." ... 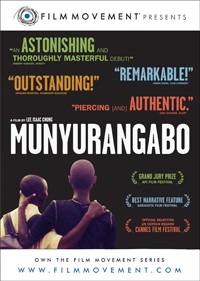