Every day, the New York City subways carry over 4.3 million people around town. It's a more or less efficient system, depending on time of day, the weather, the state of the tracks and the train, and whether the passengers comply with the rules. Trains are delayed for logistical reasons, signal malfunctions, investigations in stations, and various other reasons. I ride the subway nearly every day, and have for the last four years.

What rarely happens—and what sounds completely terrifying to subway riders—is a hijacking. The Taking of Pelham 1 2 3—an agile and tense update of the 1974 classic—plays on just that idea.

On an ordinary Manhattan day, just before 2:13 p.m., a hijacker who calls himself Ryder (John Travolta), along with his band of surly companions, boards the Pelham-bound train number 123 (the 6 train, for those in the know), stops it between stations just above 42nd Street, decouples the first car from the rest of the train and takes the passengers in the first car hostage. He radios into the Metropolitan Transit Authority (MTA) headquarters and demands ten million dollars from the mayor within an hour, or he'll shoot the hostages one by one.

Walter Garber (Denzel Washington) is sitting on the desk that controls that train line, and he receives the call. As he struggles to communicate with Ryder and preserve the lives of the hostages, facts about both men's lives begin to emerge—and the whole city gets involved in the conflict.

It's a workhorse cast—Travolta is a maniacally frightening villain, and James Gandolfini's turn as the mayor proves he probably has a lengthy comic career in front of him—and they are aptly directed by Scott, as they throw off potentially overdramatic ... 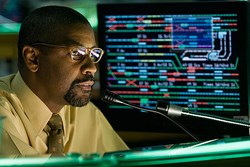