Year of the Study Bible

Christian publishers struck the right chord in 2008.
A Christianity Today EditorialApril 1, 2009
This article is from the March 2009 issue. Subscribers can read all of CT's digital archives.

In some ways, 2008 was a year of the Same Old Thing in Bible publishing. Marketing teams somehow thought up more niches to target, including the comic-book junkie (with the Manga Bible graphic novels), the avant-garde photographer (with Bible Illuminated), the eco-enthusiast (with HarperOne's Green Bible), and the tween wanting personalized charm pendants (with the Expressions of Me NIV Bible for Girls).

In another way, though, it was a year when Christian publishers remembered their first love and provided a new set of study tools for serious miners of God's Word. Tyndale's New Living Translation team released its first NLT Study Bible, a project nearly a decade in the making. Zondervan published a 30th-anniversary edition of its classic NIV Study Bible, with a 130-page topical index and updates to its 20,000-some study notes. And Crossway's long-awaited esv Study Bible—a goliath reference whose research team reads like a Reformed theologians' hall of fame—flew off the shelves before it hit them, selling 100,000 copies prior to its October 2008 release. CT editor at large Collin Hansen, who ranked the study Bible phenomenon 2008's most important theology news story, says that study Bibles may soon follow the "one-per-household" trend seen with the NIV and KJV in the U.S.

Only time will tell how evangelicals' Bible-reading and -buying habits will change in coming years, but it's hard not to notice the swell of study Bibles in 2008, and indeed, applaud it. We could do with fewer niche Bibles that—as the NIV Bible for Girls' title reflects—often put individual consumers front and center. Specialty-brand Bibles usually squeeze the Word into ideological categories that make little sense given its original ...

Year of the Study Bible

Year of the Study Bible
expand
hide this 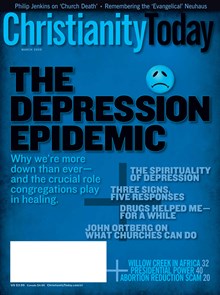