This lengthy adaptation of the highly acclaimed superhero epic—which many consider the greatest graphic novel—remains faithful to its source material, retaining most of the complex storytelling, stunning visuals, heady themes, and R-rated content.
Russ Breimeier|March 6, 2009
Our Rating

Legions of fans who have read Watchmen over the years already know they want to see this long awaited film adaptation. But for the sake of the uninitiated, let's make something perfectly clear: this is not your average, straightforward, family-friendly superhero movie.

For sure, it's got plenty of caped crusader action, but not the tame "Biff! Bam! Boom!" variety common to Saturday morning fare. The graphic violence is surrounded by a labyrinthian plot packed with satire and social commentary that oftentimes blurs good and evil into a complicated mixture of gray. Those who felt last year's The Dark Knight was too intense for its PG-13 rating may want to stay away from this one; Watchmen relishes in its R rating because there's no way to tone down its adult content while remaining true to the source material.

In other words, this film represents yet another example of the contrast between a comic book and a graphic novel. The difference should now be clear after Sin City, 300, V for Vendetta, Wanted, and Chris Nolan's Batman films, all adaptations of popular graphic novels incorporating complex stories, heady concepts, adult themes, and stunning visuals. These are indeed visual novels with mature content, giving equal weight to printed word and images—for that reason, it's a wonder that movies have only recently turned to graphic novels for ideas.

Jeffrey Dean Morgan as The Comedian, Carla Gugino as the original Silk Spectre

Ask any comic geek for their pick of the greatest graphic novel of all time, and most of them will tell you it's Watchmen. Written nearly 25 years ago, the groundbreaking story would later earn writer Alan Moore and illustrator Dave Gibbons a Hugo Award (the highest honor in sci-fi literature). Name your favorite literary classic—Watchmen is considered the equivalent among graphic novels, a masterpiece influencing everything from Pixar's The Incredibles to television's Lost.

It's also long been considered un-filmable—too dense and complicated by layers of flashbacks and interludes to shoehorn into two hours. There's also the matter of its unusual setting: an alternate reality version of 1985's New York City in which Richard Nixon is serving his third term as President (after removing term limits) and the world is on the brink of annihilation during the height of the Cold War. Can all this really work together into a comprehensive film still relevant to today's general audiences?

Surprisingly, yes. Watchmen holds together rather well, thanks to careful handling by director Zack Snyder. He's come up with a remarkably faithful adaptation that retains the story's core while trimming the elements that would have made a movie adaptation impossible—all contained within a long yet certainly watchable 2 hour and 45 minute running time.

Watchmen is a superhero film at heart, though an unconventional one at that, centering on a masked avenger team that's been integral to twentieth century American history. A brilliant opening montage (set to Bob Dylan's "The Times They Are a Changing") shows us how superheroes helped us win not only World War II, but also the Vietnam War. But years later, the superheroes lose favor with the public, who believe costumed avengers shouldn't have free reign over American democracy. A Congressional act is passed in 1977, outlawing heroes from their activities and forcing them into either government sponsorship or retirement. 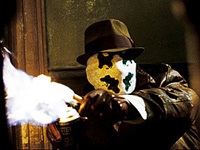 Watchmen is also a murder mystery. As the movie opens, The Comedian, one of the original team members, is hurled out of his high-rise apartment to his death. Who knew his identity and what does this mean for the other superheroes in hiding? Is it a covert government operation meant to eliminate the hidden threat of masked avengers? Some vigilante movement among the populace? Perhaps a supervillain seeking vengeance? Or is it something greater that threatens not only superheroes, but all of humanity?

In addition to the action and mystery, Watchmen is chock full of ideas starting with the question, as the Roman poet Juvenal put it, "Who watches the watchmen?" If absolute power corrupts, who safeguards that power? And then who oversees that safeguard? Watchmen explores this uneasy tension between powers both political and super, and measures their influence against the backdrop of Cold War tension between superpower nations in the 1980s.

The good news for those that don't know the source material is that Watchmen is self-contained. You don't need to know any back story because the film provides it all for the key superheroes. Why use original characters not seen in other comics? Because when all is said and done, you might not like these heroes very much. Watchmen deconstructs popular superhero archetypes to play them out against the harsh realities of our world, revealing them to be flawed and damaged, if not deranged.

• The Comedian is a variation on Captain America, except he has an extremely dark side that becomes more apparent as he grows more jaded.

• Ozymandias matches the athleticism of a Greek Olympian with calculating intelligence, capitalizing on his identity to launch one of the world's most successful corporations.

• Nite-Owl resembles Batman with his reliance on technology, but he's grown reclusive, cowardly, and impotent since retirement.

• A bit like Wonder Woman with her fighting skills, Silk Spectre is unfulfilled with her life, living in the shadow of her mother, the 1940's original Silk Spectre.

• Rorschach (named after the psychological ink blot test that resembles his mask) hearkens back to The Spirit. The more he patrols the streets and sees the ugliness of his city, the more he questions his cold, unwavering pursuit of justice.

• The only hero with true powers is Dr. Manhattan, a nuclear scientist who gains God-like atomic powers after an experiment goes awry. Gradually, he seems to be losing touch with his humanity the more he comes to understand his seemingly limitless abilities.

We learn about these characters and their history with each other as Rorschach launches an investigation into The Comedian's death. Some of the heroes rediscover the thrill of crime-fighting by taking on thugs in back alleys. Others begin to question their roles, wondering if humanity is worth saving, or if it even can be saved with the threat of nuclear holocaust looming.

The scope of Watchmen is large and full of nuanced storytelling. Don't see it expecting brainless escapism. It's not overly abstract or hard to understand, but there is a lot to digest; it'll bury you if you don't keep pace with it. If there's a problem with Watchmen's story, it's that it's a little too smart for its own good, stuffed with challenging ideas but lacking a heart. As such, some will find it all a little too cold and bleak, though there's a beautiful monologue concerning beauty from ashes that's sure to resonate. 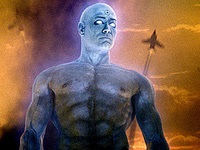 I also can't stress the graphic content enough. Instead of showing restraint, Snyder—who previously demonstrated his love for ultra-violence with 300 and his remake of Dawn of the Dead—amps up the blood and carnage in some scenes. It's stylized, but gruesome enough to turn off many a viewer. He's also preserved the source material's sex scenes, not to mention Dr. Manhattan's habit of appearing fully nude.

However, content aside, Watchmen is an ambitious, visionary epic that is well-matched to Snyder's imaginative style. The director made some unusual choices with his casting, yet almost all of them are spot-on in their roles, particularly Jackie Earle Haley, Jeffrey Dean Morgan, Patrick Wilson, and Billy Crudup (who voices the CGI creation of Dr. Manhattan).

Snyder clearly respects the source material and brings the graphic novel to life with impressive visuals that are sure to leave an impression. My favorite scenes include the opening montage of the Comedian's murder, the beauty of a lonely Martian landscape, and the menace suggested through a swinging bathroom door. And though Snyder's use of slow-motion effects begin to wear after a while—like italics and all-caps in writing, you don't want to OVERUSE them—there's something to be said for an action film where you can follow every precise punch and leap.

Watchmen is not an easy superhero movie by any means, nor does it resemble what you would typically expect from the genre. But that's precisely why so many have latched on to the graphic novel over the last twenty-three years. It's a surprisingly good adaptation of unique sci-fi material that is challenging and haunting.

Watchmen is rated R for strong graphic violence, sexuality, nudity, and language. Take the rating very seriously, as it applies the superhero genre to a gritty, real world environment. The fight scenes are graphically depicted with broken bones and spurting blood—in one particularly nasty scene, a thug's arms are sawed off. There's plenty of nudity, most notably Dr. Manhattan, a ghostly-looking CGI generated superhero often depicted fully nude. The sexuality involves a couple of very adult scenes involving intercourse, as well as an attempted rape. And the language runs the gamut from the f-bomb to misusing God's name. This may be a movie about comic book characters, but it's definitely not for kids and sensitive viewers.