Jennifer Knapp hit the stage for the first time in four and a half years Thursday night, appearing to a sold-out crowd in the tiny Hotel Café venue in the heart of Hollywood, in what has been billed as her "comeback concert."

Knapp, looking much the same as when we last saw her (maybe with a few new tattoos?), took the stage after friend and fellow CCM veteran Phillip LaRue played a handful of songs as an opener.

Once on stage, alone with an acoustic guitar, Knapp said, "They say it's like riding a bike. We shall see … " Then—to great applause—she launched into one of her biggest hits, "A Little More," from her Grammy-nominated album Lay it Down (2000). After the huge applause for that first song died down, someone in the audience shouted out, "How's the bike treating you?" to which Knapp replied, "It's a 21 speed and I'm about ready for a tricycle."

For the remainder of her 9-song set, Knapp played all new songs, many of which she said she "wrote last week."

"You guys have had about seven years of listening to the same boring three records," said Knapp early in the show, seemingly to justify the absence of most of her older hit songs from the set list. But despite most of the music being totally new to everyone in the room, the audience of devoted fans (some had flown to L.A. just for the concert) was thoroughly rapt the whole time.

A week ago, Knapp had broken her long public silence with a statement on her website, saying that she had been "traveling mostly" during her time away from music. She wrote: "My experiences have been both wildly exotic and extraordinarily mundane. But mostly I will say that I have had a chance to get my feet under me. I took that time to discover more about myself and my own ... 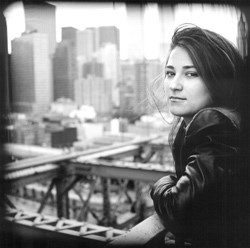