The combination of Tina Fey and Steve Carell makes this otherwise routine comedy quite funny, while also saying something about keeping marriage strong.
Brett McCracken|April 9, 2010
Our Rating

Date Night is a film that tries to be a lot of things: A comedy, an action movie, a madcap family-friendly adventure, a "perfect date night movie," and a feel-good star vehicle for two of network television's most familiar faces. Usually when a movie tries to be too many things, it fails miserably. Date Night, however, manages to succeed in most areas, thanks mostly to the charisma and chemistry of its two lead stars.

In the film, directed by Shawn Levy (Night at the Museum), Tina Fey (30 Rock) and Steve Carell (The Office) play Claire and Phil Foster, a thoroughly normal, yuppie-ish couple from New Jersey with two young kids, two solid careers, and a weekly "date night" at a local restaurant. Their by-the-book marriage isn't on the ropes, but it's not exactly brimming with passion either.

In order to inject some much-needed romance into their ho-hum marriage, Phil decides to take Claire out for a special date night-on-the-town in Manhattan. They go to the hot new restaurant, "Claw" (a highbrow seafood restaurant that is exactly as it sounds), but cannot get a table without a reservation. When the hostess calls out a no-show couple's name, Phil raises his hand and claims that he and Claire are the "Tripplehorns," thus securing a table for dinner. Trouble is, the real Tripplehorns are actually a criminal couple being hunted by the mob, which spells danger for the imposter Fosters, in the form of guns, car chases, and seedy strip club encounters with dangerous mobsters. What was supposed to be a romantic night away from their hectic home life turns into a "this is not who we are!" nightmare of mistaken identity for the Fosters, but in the end their criminal adventure proves to be exactly what the relationship doctor ordered. 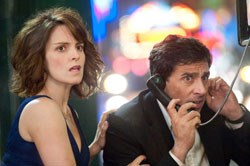