This faith-based flick about a young boy dying of cancer has its heart in the right place, but it's a bit too movie-of-the-week in sentimentality. PLUS: Exclusive clip
Carolyn Arends|April 9, 2010
Our Rating

Tyler Doherty is an eight-year-old cancer patient who loves God first and soccer second. Brady McDaniels is a mailman struggling with alcoholism and the break-up of his family. Tyler writes direct, heartfelt Letters to God as a means of praying his way through his illness. Brady picks up those Letters on his postal route and is touched and changed by his encounters with Tyler's faith; so are many of the other characters who populate the unabashedly Christian family drama Letters to God.

The film's co-director Patrick Doughtie, who lost his real-life son Tyler to cancer in 2005, wrote the initial screenplay for Letters to God. Although Doughtie fictionalized many of the elements of Tyler's story for the big screen, it's clear that this film comes from a deeply personal place. The compelling raw material was a perfect match for newly minted Possibility Pictures, director David Nixon's production company. Nixon previously produced the mostly volunteer-made surprise Christian hits Facing the Giantsand Fireproof. Letters is his first time in the director's chair and his first opportunity to work with a budget large enough to secure a professional cast and crew. The result is a film more technically polished than Facing the Giantsor Fireproof, but equally overtly evangelical in its narrative—meaning it will likely delight viewers who loved those earlier movies and further frustrate those who longed for subtler storytelling.

There is much to love about Letters to God. Tanner Maguire (Saving Sarah Cain) gives Tyler a nice mix of spunk and pathos, and Bailee Madison (Brothers) makes Tyler's best friend Sam a winsome scene-stealer. Veteran actor Ralph Waite (of Waltons fame) does what he can with some rather dialogue-heavy exchanges, ... 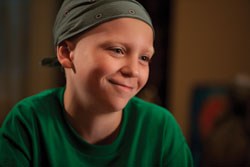