Despite its style and flash, Takers suffers from clichés, a lack of originality and moral ambiguity.
Todd Hertz|August 27, 2010
Our Rating

After Ocean's Eleven (2001) opening weekend, I gathered with coworkers for a coffee break and raved about how much fun it was. A respected mature Christian within earshot lightheartedly joked, "Because rooting for immoral thieves is always fun!" He wasn't being a curmudgeon but was just pointing out a very real discernment issue: crime movies often present criminals as heroes. And we buy into them.

From Robin Hood to Godfather to Butch Cassidy and the Sundance Kid, we find ourselves rooting for the guys on the wrong side of the law. This aspect of the cops-and-robbers thriller Takers really stood out to me—and hurt my enjoyment of the film.

Takers (whose producers include rapper T.I. and singer Chris Brown) is a standard cat-and-mouse plot about a group of talented, big-ticket robbers and the cops who chase them. Imagine a cheap MTV remake of Heat and you aren't far off. The film follows this slick band of "takers" as they complete a stunning bank job (with a neat getaway) and are then talked into aborting their usual one-year break between gigs by a former member of their group, T.I., who's newly released from prison. Reunited, the group plots an armored car heist—all the while dodging threats from various angles.

The film is a grittier, urban-L.A. spin on Italian Job (2003) and Ocean's Eleven—but it feels very different in the morals department. Yes, each of these movies invites us to get to know a group of veteran thieves planning and pulling a huge heist. And each also uses the old "well, they are bad guys but they aren't as bad as the other bad guys" approach to create sympathy for the devils. So what is the difference? For me, it boiled down to three traits of Takers. 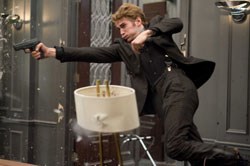