Christian leaders get sneak peek of next Narnia movie, like what they see; filmmakers admit "mistakes" on Prince Caspian, vow to get it right this time.
Mark Moring|March 2, 2010

The filmmakers behind the Narnia movies, admitting they "made some mistakes" with 2008's Prince Caspian, believe they have righted the ship for The Voyage of the Dawn Treader, coming to theaters in December.

After the first Narnia film, The Lion, The Witch, and The Wardrobe, earned almost $750 million worldwide in 2005, Prince Caspian—a big disappointment to many fans of the beloved books by C. S. Lewis—earned about half as much. Domestically, Caspian made just $141 million, far short of its reported $225 million production budget.

But since then, Walden Media (which produced the first two films) and Disney (which distributed them) have parted ways; Walden is now partnering with 20th Century Fox for distribution. A new director, Michael Apted, replaces Andrew Adamson, who helmed the first two Narnia films (and is a producer for Dawn Treader). Those changes, and a renewed commitment to the message of the books, have filmmakers optimistic.

"We made some mistakes with Prince Caspian, and I don't want to make them again," said Mark Johnson, a producer on all of the Narnia films. He said Caspian lacked some of the "wonder and magic of Narnia," was "a little bit too rough" for families, and too much of a "boys' action movie." He said it's "very important" that filmmakers regain that magic for Dawn Treader, now in the editing stages—and he's convinced they've found it: "I want to climb on the rooftops and say we have a wonderful Narnia movie."

Johnson and execs from Fox and Walden did the next best thing, inviting 100 Christian leaders to a "Narnia Summit" held Feb. 16-18 in Los Angeles, where they showed clips from Dawn Treader and went through the entire script. Apted was flown in from London to join producers Johnson, ... 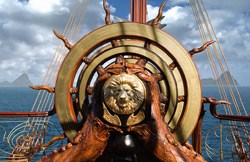