Trafficking of teenagers in the U.S. is getting worse. Here's what some Christians are trying to do about it.
Elissa Cooper in Asheville, North CarolinaApril 30, 2010
This article is from the May 2010 issue. Subscribers can read all of CT's digital archives.

During the October raids, law enforcement rescued 52 minors (children under age 18) trafficked into either prostitution or adult entertainment. Nearly 700 people, including 60 pimps, were charged. Since June 2003, the task force has recovered 886 minors from the sex industry. The raids have resulted in 510 convictions and $3.1 million in property seizures.

Despite these victories, new research indicates that the sex-trafficking problem in the United States is more widespread and more severe than previously thought.

Shared Hope International, a Christian anti-trafficking nonprofit group founded by former Congresswoman Linda Smith in 1998, received a federal grant to survey domestic sex trafficking of minors. The survey found that many sex-trafficking victims were being misidentified and wrongly prosecuted as criminals. In some cases, the survey found, children as young as 9 years old were being sold for sex by parents or boyfriends in exchange for illicit drugs. Organized crime networks are now using sex trafficking because the risk of prosecution is so low. The survey determined that a high percentage of teens rescued from trafficking return to the system due to the strong bonds they form with their pimps.

"Most Americans do not realize that child trafficking is a major problem on Main Street USA," said Ernie Allen, president of the National Center for Missing and Exploited Children, at a February congressional hearing. "These kids are victims. This is 21st-century slavery." 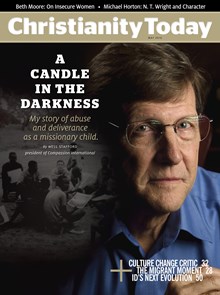 This article is from the May 2010 print issue. Subscribe to continue reading.