The Facebook creation myth comes vividly to life in this sophisticated film.
Alissa Wilkinson|October 1, 2010
Our Rating

It's August 2004. I'm sitting in an ugly chair in the student union with my laptop balanced on my knees, checking my senior year course schedule. I had spent the summer working as a student orientation advisor for incoming freshmen. My coworkers and I had had a fantastic time working and living together, and we're sad that we can't keep up with one another as well as we'd like, now that classes are starting and the campus is filling back up.

I open my e-mail and there's an invitation to join a site called thefacebook.com. I think it might be spam, and I'm about to delete it when two girls walk by and I hear them say something about a "face book." Well, okay, I think. And I click on the link.

A week later, campus productivity has all but disappeared. We routinely tell people to "just facebook me." Many of us now know things about that guy we sat next to in physics last year that we used to not know about some of our friends: political and religious beliefs, favorite bands, relationship status. To my excitement, this website means my friends and I can now keep in touch more easily, even though we've all gone back to our daily world of classes, homework, and clubs.

Six years later, I (and five hundred million other people) can hardly remember that world, in which if you failed to get someone's phone number, you might never see them again; where you couldn't see pictures from last night's party online the next day; where leaving a note on your friend's "wall" was an act of vandalism, or would at least leave a few thumbtack holes.

In spring 2003, not long before his website changed our world, a misanthropic but vaguely hapless sophomore at Harvard named Mark Zuckerberg (played by the excellent Jesse Eisenberg) could bring down an ... 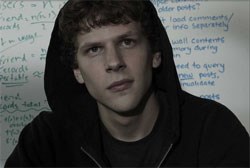