Robert Redford recreates the trial of a woman accused of aiding in the assassination of Lincoln.
Steven D. Greydanus|April 15, 2011
Our Rating

The Conspirator opens on a Civil War battlefield where two wounded Union soldiers lie waiting for aid. One starts a joke about two men meeting at the pearly gates, but when the situation changes the joke is interrupted and forgotten.

That in-the-moment immediacy runs through Robert Redford's film, an engrossing re-creation of a little-known but fascinating and sobering chapter in American history. Credibly researched by screenwriter James Solomon, and beautifully filmed by Newton Thomas Sigel (The Usual Suspects, Three Kings, Valkryie), it's a rare historical drama that credibly captures a sense of another era while allowing its characters to breathe and talk and argue like men and women living in the present tense. No one in The Conspirator seems aware that they inhabit a period piece.

The assassination of Lincoln is one of the most iconic moments in American history. Less well-known is the larger context: a conspiracy to decapitate the Union and regalvanize the Confederacy with simultaneous attempts on the lives of Andrew Johnson and William H. Seward, the secretary of state. The Conspirator opens with a grimly persuasive re-creation of the events of that tragic evening, quickly proceeding to largely unknown aftermath: the trial of Booth's fellow conspirators, and a woman who may or may not have been one of them.

Mary Surratt was a Southern Catholic widow who ran a boarding house where Booth and his fellow conspirators often met—and whose son John was the only one of Booth's fellow conspirators to evade capture in the months after the assassination. Was Mrs. Surratt prosecuted by way of trying her fugitive son by proxy? Or, if she was a conspirator, to which conspiracy was she a party? For that matter, to which was ... 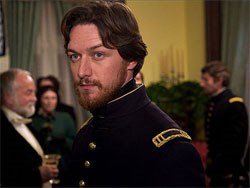