It tries to make up for its lack of depth with a lot of likable stars, but it falls flat.
Camerin Courtney|December 9, 2011
Our Rating

You know those clown cars in the circus? They're usually a little Volkswagen bug that brightly dressed clowns climb out of one by one while you watch amazed that so many people could fit into one little car. Once they're all out in the circus ring, the clowns typically run around mugging for the audience, occasionally bumping into each other, and then drive off in a haze of chaos and laughter.

In case you haven't noticed the overflowing cast list to the right, take a gander. And that's only the beginning; others you'll no doubt recognize include Sarah Paulson, Sofia Vergara, Ludacris, Alyssa Milano, Cary Elwes, Carla Cugino, Jim Belushi, Cherry Jones, Larry Miller, Common, Sienna Miller, Ryan Seacrest, Til Schweiger, Yeardley Smith, and Hector Elizondo. As one of the characters put it, there are more stars than at rehab.

We watch this cavalcade of actors in and around New York City in the hours leading up to New Year's Eve. The opening voice-over sets the scene: "Some people say there's no beauty left in the world. But how do you explain the whole world coming together on New Year's Eve to celebrate hope?" (By the way, your reaction to this line—either sweet agreement or snarky eye-rolling—is a great indicator of how you'll feel about the film.)

So how do these countless characters gather for said celebration?

Chef Laura (Katherine Heigl) is sweating over her biggest catering job ever—the NYE party for a successful record label. Jensen (Jon Bon Jovi), a mega music talent, manages to perform both at that fete and at the Times Square ball drop on national television—all while trying to win back the woman he jilted about a year before. Claire Morgan (Hilary Swank) is ... 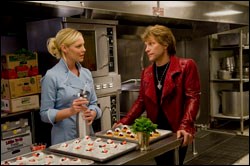