No matter your opinion of Christian films or, specifically, church-made films like Facing the Giants, Fireproof and To Save a Life, one thing is clear: They are inspiring other churches and Christians to make their own films and tell their own stories. Such is the case for The Grace Card.

David Evans from Calvary Church in Cordova, Tennessee (a Memphis suburb), saw Fireproof (made by Sherwood Baptist Church) and thought, "We could do that too." Serving as director and executive producer, Evans led the church's creative arts team in anchoring a cast and crew of relative rookies by recruiting an experienced screenwriter, Howard Klausner (Space Cowboys), and sending their script to veteran actor Louis Gossett, Jr. (whose recent resume includes Christian films like Left Behind: World at War and The Least Among You).

What might be surprising is that former Oscar winner Gossett—who has a small role here—does not turn in the film's best performance. Or that the writing does not stand out from other Christian movies. Instead, the film's greatest strength is the dynamic performances of its two newcomer lead actors, Michael Joiner and Michael Higgenbottom.

At the film's center is Bill "Mac" McDonald (Joiner), an embittered cop still fighting through the pain and regret of his young son's death nearly 17 years ago. The casualties of his pain include his wife Sara and another son, Blake, who also carry years of burden. Everything is falling apart for Mac: He continues to be passed over for promotion, his marriage is a shell of true relationship, and Blake is experimenting with drugs and failing his senior year of high school. And in Mac's view, the bad news got worse when he is forced to partner with the guy who got promoted ... 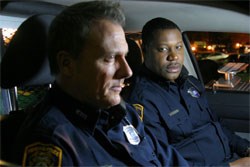