An alien with budding superpowers hides from assassins by pretending to go to high school.
Kenneth R. Morefield|February 18, 2011
Our Rating

A dreary, explosion-saturated cross between Terminator, Twilight, and The Matrix, I Am Number Four spends about ninety minutes setting up the tent pole without ever really giving any back-story details—got to save something for the sequel, right? And it spends another twenty minutes on a climactic fight between a bunch of aliens who we know are evil because they dress like Goth teenagers and a bunch of aliens we know must be good because they look like WASP teenagers.

The premise of the film is that there are nine aliens hiding on earth from predators out to destroy them, thus terminating their race. In a before-the-credits action sequence, Number Three is killed in a jungle. Number Four/John Smith (Alex Pettyfer) feels a tattoo on his leg begin to throb, Harry Potter-like, so he knows the wicked Mogadorians are coming for him next. Henri, John's bodyguard in name only (he spends more time on the Internet trying to erase social media pictures that the alien assassins could use to track them down than in doing any actual guarding), figures they can probably disappear in central Ohio for awhile, despite John's emerging tendency to glow blue light from various appendages. In the tradition of great cinematic bodyguards, he sends John off to high school after John promises that he will blend in and check his cell phone every hour. A teenager who only checks his cell phone once an hour? Now that's going to stand out!

Needless to say, it takes John all of about five minutes to stick up for the local bullied nerd and make eyes at the quarterback's ex-girlfriend, an amateur photographer who likes to post her candid shots on the web. (Seriously, at this point I was wondering if the film were a $50 million PSA reminder to double ... 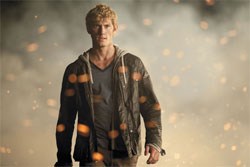