I'll at least say this much for Just Go With It: It's a thoughtful title. Given the low bar set by previous match-ups between Adam Sandler and his director pal Dennis Dugan, it makes sense that they would warn us, before the movie even starts, to simply give up, throw in the towel, and resign ourselves to the fact that yep, it's another stinker. Don't try to fight it. Just go with it.

Or, don't. Dugan and Sandler seem to have one of those toxic relationships that brings out the worst in each other, and their previous collaborations have included the painfully unfunny and crass Grown Ups and the lowbrow, semi-political I Now Pronounce You Chuck and Larry. Just Go With It is, thankfully, a markedly funnier movie than either of those, and in its best moments—particularly in its final third—it takes on a stronger resemblance to some of Sandler's sweeter romantic comedies, particularly 50 First Dates. But of course, this is about the faintest praise one could muster.

If Grown Ups was a Sandler movie so lazy it made you wonder if the guy was even trying anymore, and Chuck and Larry was completely muddled in its cake-and-eat-it convergence of bawdy, homophobic humor and tolerance-espousing politics, Just Go With It is perhaps a bit closer to the latter. In the end, the movie tries to be a sort of heartfelt story about the importance of being honest, both with others and yourself, but the point is buried under lowest-common-denominator humor and a screenplay crawling with clichÉs.

This time, Sandler—playing a variation on the same character he's played so many times before—is a plastic surgeon by the name of Danny, who had his heart broken just minutes before his own wedding and ever since has refused to ... 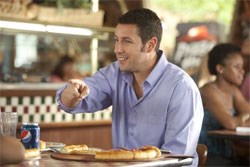