Glenn Kaiser on his new album, Chicago's homeless, his own history with poverty, and the 40-year anniversary of the Jesus Movement.
Mark Moring|June 8, 2011

Glenn Kaiser, who turned 58 this year, has been around the block more than a few times—including quite a few of them in downtown Chicago, where he lives as part of the Jesus People USA community (JPUSA), a community he helped to found in 1972. Kaiser, who grew up poor in Wisconsin, has long been one of the pastoral leaders at JPUSA, and now works with many of Chicago's poor and homeless through the ministry's homeless shelter, Cornerstone Community Outreach.

And oh yeah: He plays a mean guitar. And sings the blues.

Kaiser was one of the original Jesus rockers, gaining fame decades ago as frontman for Rez Band, which formed in 1972 and broke up in 2000 (though they've had a couple reunion gigs since). For much of the last decade, Kaiser has split his time between Glenn Kaiser Band and his solo albums, focusing primarily on the blues—which, he's quick to remind anyone listening, he was playing long before he turned to rock music. (See our 2005 interview with Kaiser about singing the blues.)

His new solo project, Cardboard Box, really brings the blues home for Kaiser. Including songs with titles like "Unemployment Blues" and "Urban Hobo," the album is an ode to Chicago's poor and homeless, with bluesy licks and lyrics that help the listener step into the shoes of those who live on the streets. Kaiser will donate most of the profits from the album and touring to Cornerstone Community Outreach.

CT spoke with Kaiser about the album, his own history with poverty, and the 40th anniversary of the Jesus Movement.

You've been singing the blues for a long time, and I can't think of a demographic that lives the blues more than the homeless and the poor. So was this kind of a natural transition for you? 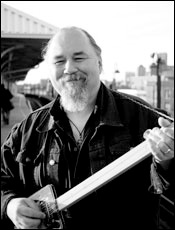