The man who created such beloved Disney characters as Ariel (from The Little Mermaid), Pocahontas, Aladdin, Tarzan, and The Beast wanted, for well over a decade, to bring Rapunzel to the big screen.

In the legend of Rapunzel, that's a reference to her healing tears. But for Keane, the "gift that had to be shared" was not only his drawing talent, but his Christian faith—in subtle though exemplary ways in his work with Disney's animated films.

His dream of seeing Rapunzel's story told was finally realized last year with the box office hit Tangled, which releases to DVD and Blu-Ray today. We recently spoke with Keane—who describes himself as "basically an actor with a pencil"—about Tangled, his work with Disney, and his faith.

Please tell us about your specific contributions to Tangled.

It was a fairy tale that just fascinated me, and in 1996 I started to develop it while I was working on Tarzan, which makes it by far the longest thing I've ever done. After a while, I realized that the only way this movie's going to happen is if I direct it, so I started to direct it. It went through a period where it was called Rapunzel Unbraided, a Shrek-like version of the film. It was really witty and clever, but I've always animated characters that have this burning desire inside of them, and [that version] didn't feel like me. There was something missing in the sincerity of the story. We then started from scratch and worked on it until 2008 when I had a [non-life threatening] ... 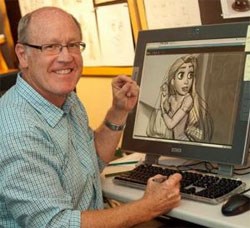