Actor Mark Ruffalo has endured plenty of hardships, and his new film tries to work them out—emotionally and spiritually.
Mark Moring| May 4, 2011

A brush with death will get you thinking about things more deeply than ever. Just ask Mark Ruffalo, who has had rubbed shoulders with death on too many occasions.

The 43-year-old actor (Collateral, Zodiac, Shutter Island, The Kids Are All Right) survived a brain tumor in 2002 that left half of his face temporarily paralyzed and left him deaf in his left ear. His best friend committed suicide in 1994 at the age of 26. Two years later, another best friend, Christopher Thornton, was injured in a climbing accident that left him paralyzed from the waist down. And in December 2008, Ruffalo's brother Scott, 39, was shot to death in Beverly Hills in a still unsolved homicide.

At about the same time of Scott's death, Ruffalo and Thornton were just beginning to make a movie, Sympathy for Delicious, which released to limited theaters last week. The film, Ruffalo's directorial debut and based on a script by Thornton, has been in development for the better part of a decade since Thornton penned the original story, and while they looked for investors to fund the project. Sympathy stars both men, while the supporting cast includes Laura Linney, Juliette Lewis, and Orlando Bloom.

The title character, played by Thornton, confined to his wheelchair, is "Delicious" Dean O'Dwyer, a paralyzed musician who lives on LA's Skid Row. After attending a charismatic healing service, O'Dwyer learns that while he hasn't been healed, he now has the gift of healing others. Father Joseph (Ruffalo), who ministers to those on Skid Row and has befriended O'Dwyer, notices that donations for the homeless shelter have begun to skyrocket since his friend started healing people. As the money grows, so do the desires of both men—they both want a "cut" of the income, ... 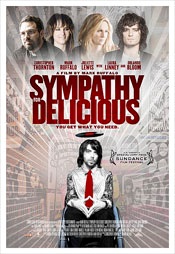