Ever since I read, as a child, about Corrie ten Boom forgiving a Nazi guard in The Hiding Place, I've been a sucker for forgiveness stories—especially in the movies. The Green Mile, The Straight Story, The Spitfire Grill, The Mission, and even the end of Spider-Man 3, where Peter/Spidey forgives the Sandman/Flint Marko for killing his beloved Uncle Ben.

But the most powerful stories of forgiveness are the real ones as often depicted in documentaries. Martin Doblmeier's The Power of Forgiveness and Laura Waters Hinson's As We Forgive are both near the top of the list—especially the latter, which explores reconciliation in Rwanda in the wake of the 1994 genocide. I was in Rwanda two years ago and saw some of these stories myself.

We can now add Fambul Tok (First Run Features), which just released to DVD, to the list of "forgiveness documentaries." The film features victims and perpetrators coming together in the wake of Sierra Leone's civil war, which featured some of the same types of atrocities as the Rwanda genocide and the horrific methods of Joseph Kony and the Lord's Resistance Army in other parts of Africa.

But such reconciliation doesn't come easily or naturally. It takes hard work on the part of peacemakers. While Sierra Leone had established a Truth & Reconciliation Commission (much like South Africa at the end of apartheid), and a number of warlords were tried and convicted in a special court, some folks believed that true reconciliation and forgiveness could not be court- or state-mandated, but had to occur at the grassroots level—in neighborhoods and villages, with perpetrators and victims meeting face-to-face.

The film, directed by Sara Terry, focuses especially on John Caulker, a man who takes ... 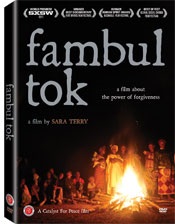