The creators of 'Wallace and Gromit' take to the high seas for an outrageous family comedy.
Josh Hurst|April 27, 2012
Our Rating

A young Charles Darwin shows up to a fancy dinner party with an unusual guest—a monkey named Mr. Bobo, clad in a tuxedo and handling the food and drink just like a human. Since he hasn't yet written On the Origin of Species, Darwin thinks nothing of it. But another guest—a buccaneer known simply as Pirate Captain—notices that Chuck (as he calls him) and Bobo share some mannerisms. "Are the two of you related?" he asks, and a comedic flash of revelation crosses Darwin's face. And thus the notion of evolution is born.

A few hours earlier, Pirate Captain and his band of plunderers arrived in London for a science convention, figuring a partnership with Darwin to be their ticket to some major booty. They know full well that pirates who show up in Queen Victoria's city seldom live to tell about it, so the (almost) entirely male pirate crew shows up with a well-planned disguise—as a troop of girl scouts.

These are very brief moments in a film that rolls along at a crisp pace. One is even tempted to call them throwaway gags—if any comedy bit so perfectly orchestrated could be a throwaway. Yet, I suspect your enjoyment of The Pirates! Band of Misfits can be gauged by your appreciation of this kind of humor, which animates the entire film—always very smart, generally very silly.

Pirates is the latest film from Aardman, the studio that brought us Chicken Run and Wallace and Gromit (both the TV specials and The Curse of the Were-Rabbit movie). Pirates shares with those a very dry and very British sense of humor and cleverness. Aardman takes a while between feature films, partly due to their painstaking stop-motion animation process, but perhaps also because facilitating this kind of brainy/loony comedy ... 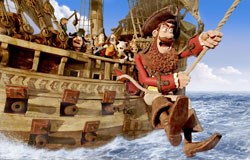