They're still making movies out of Nicholas Sparks novels. But nothing as good as 'The Notebook,' including this drivel.
Ashley Moore|April 20, 2012
Our Rating

Imagine you're a Marine, walking through a war-torn foreign country and discovering a photograph on the ground of a beautiful woman. Written on the back are the words "keep safe." You keep the photo, and after a few near-death experiences, you decide that this woman is your good-luck charm. When you finish your last tour, you return to the U.S. and set out to find this woman. You believe that thanking her for keeping you safe will help you move on from your own post-traumatic stress, mingled with the guilt you feel for staying alive when so many of your comrades did not. Once you find the woman, who owns a dog kennel in Louisiana, you can't seem to explain your story. Eventually, romance ensues while she remains in the dark about the photograph, and your real reason for finding her.

And there you have the plot of The Lucky One.

If it sounds like another cheesy Nicholas Sparks story, well, it is. I developed a begrudging kind of respect for films based on Sparks' novels after I sat through (read: sobbed through) The Notebook for the first time. I fell in love with the love story, because in so many ways, it felt tangible, real, and relatively un-cheesy. I watched two characters fall in love, argue, learn from each other, challenge each other, and bring a gentle, natural performance to the screen in a way that was both beautiful and believable. (Of course, having Ryan Gosling and Rachel McAdams, two of today's finest actors, certainly helped.)

Unfortunately, I'm fairly certain The Notebook ruined any future films' chances, because since then, I have hated every other Sparks-sparked film I've seen. The Lucky One held promise, but in the end, it felt like too many other recent dumbed-down romantic films.

The formula had potential: ... 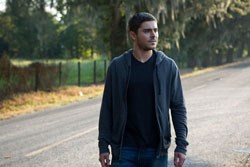