Edgar Allan Poe may have pioneered "horror" stories, but he probably never envisioned this.
Brett McCracken|April 27, 2012
Our Rating

The obvious way to begin a review of The Raven would be to make a witty reference to "Nevermore," that most foreboding and memorable of raven quips made famous by Edgar Allan Poe. But getting right to the point: The Raven is not a good movie, disappointing for a lot of reasons but chiefly because it squanders a pretty good concept and fails to maximize the inherent macabre camp of its premise.

The Raven, directed by James McTeigue (V for Vendetta), fails in part because it takes itself so seriously. The film doesn't seem to recognize that its central plot contrivance—Poe (John Cusack) finds himself in a real-life murder mystery inspired by his own works of fiction—doesn't really lend itself to straightforward, "this could really happen" realism. The film tries to be a serial killer crime procedural in the mold of Se7en and Zodiac, when it would have been better off going the Tim Burton-and-Johnny-Depp quirky goth route (Sleepy Hollow, Sweeney Todd).

In any case, here's the life-imitating-and-intermingling-with-art concept: a series of grisly murders take place in 1849 Baltimore that appear to be modeled after Poe stories like "Murders in the Rue Morgue" and "The Pit and the Pendulum." The lead investigator, Detective Fields (Luke Evans), recognizes the Poe connection and brings in the author himself to help get inside the mind of the killer. A cat-and-mouse psychological game ensues, as the killer continues his Poe-inspired murders and practically begs Poe to figure out how the story will end (and maybe even write it himself). The ante is upped when the killer kidnaps Poe's love interest, Baltimore debutante Emily Hamilton (Alice Eve), the "Annabel Lee" for whom Poe will do anything to save from a gruesome catacombs ... 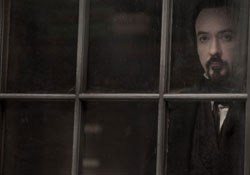