The franchise gets new faces and new chases, but runs through some familiar paces.
Kenneth R. MorefieldAugust 10, 2012
Our Rating

To the extent that film records and reflects the shifting attitudes of the culture that produces it, the Jason Bourne franchise has been a snapshot of growing disillusionment with the American government, war, and covert intelligence gathering in the first decades of the 21st century.

Many of the films of 2003 (the year in which the U.S. invaded Iraq) centered on an outnumbered but morally upright group defending freedoms in the face of an external threat: The Alamo, Master and Commander, The Last Samurai, The Matrix Revolutions, and The Return of the King.

Then 2004 brought a shift in attitudes toward the war and those who had conceived, fought, and sold it. Pictures of detainees at the Abu Gharib prison were leaked. Vanity Fair published a widely publicized and influential article on "The Path to War," questioning the evidence for weapons of mass destruction in Iraq. Films took a more cynical attitude toward war and those who waged it. Troy imagined Achilles as a noble fighter disgusted by the ineffectual and corrupt leaders who used him for their own ends; when he tied the body of a defeated foe to the back of a chariot and dragged it around the city, American audiences squirmed, not quite sure with whom to identify: the arrogant conqueror or the fallen defender of his home and family. The Bourne Supremacy concluded with an elite assassin apologizing to the daughter of his first victims followed by a cut to the New York skyline (sans Twin Towers), symbolically suggesting a link between the terrorist attacks and covert, immoral actions of government agencies that terrorized the world and brought pushback to our soil. No matter, Jason Bourne was about to go from being "off the grid" to being a rogue agent bringing vengeance ...

Join in on Facebook
Tags:
None
Posted:
August 10, 2012
More From:
Kenneth R. Morefield 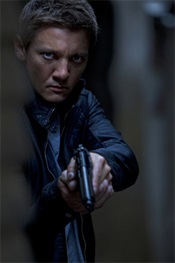 The Bourne Legacy
expand
hide this