Despite great singing, 'Sparkle' is tarnished by stereotypical characters and overdramatic scenes.
Camerin CourtneyAugust 17, 2012
Our Rating

Why, why, why do women in musical girl groups ever try to find love? Haven't they seen the other movies? Don't they know that men will be their downfall? The Anderson sisters—Tammy (known as Sister, played by Carmen Ejogo), Dee (Tika Sumpter), and Sparkle (Jordin Sparks)—apparently haven't been warned. So we watch the familiar unraveling, shaking our heads at the screen over all the lost potential, all the unnecessary carnage. (Oh c'mon, as if that's any kind of spoiler).

It's 1968 Detroit, and we open with two young African American women in a nightclub. One, dressed in a sexy silver dress, is getting ready to perform, and the other, dressed in a demure sweater and skirt, is begging her not to back out. Sister does take the stage and belt out a vampy song, much to the delight of the men in the audience and the joy of her sister, Sparkle, who wrote it (well, thanks to Curtis Mayfield). Five minutes later the sisters are on a bus home, hoping to sneak in before their overprotective mom wakes up and realizes they've been gone.

So much of what's right and wrong with Sparkle is packed in those opening scenes. The great music and performance. The great costuming and late-60s nightclub vibe. But also the stereotyped characters and well-worn plotlines.

In fact, this isn't the first time Sparkle has hit the big screen. The original 1976 movie was set in 1950s Harlem and starred Irene Cara as Sparkle and Philip Michael Thomas as her boyfriend/manager Stix. Deborah Martin Chase, who produced this new version, had been working with Whitney Houston (Sparkle executive producer and a co-star here) for over a decade to remake the film, and, sadly, it wound up being Houston's final project.

Join in on Facebook
Tags:
None
Posted:
August 17, 2012
More From:
Camerin Courtney 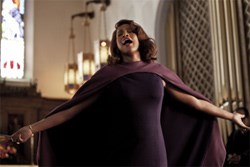